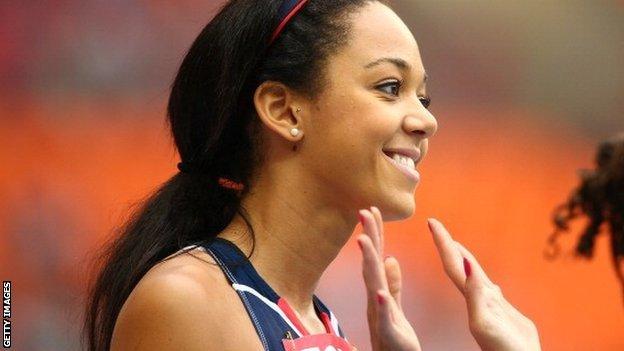 Katarina Johnson-Thompson can be an even better heptathlete than Jessica Ennis-Hill, says Toni Minichiello.

Briton Johnson-Thompson is sixth at the World Athletics Championships - which Ennis-Hill has been forced to miss through injury - after four events.

Ennis-Hill's coach told the BBC: "She is better than Jessica pound-for-pound.

I think that a medal will be a stretch for Katarina, I think a top-eight finish is what you are looking at

"If you look at what Jess did at her age as a junior, Kat's performed better than that every single time. If she keeps going she'll probably be better."

The Liverpool athlete, 20, clocked 13.49 seconds in the opening event - the 100m hurdles, just 0.01 outside her personal best, and followed it up with a clearance of 1.83m in the high jump, narrowly down on her season's best.

That put her on 3739 points, 97 off American Sharon Day in bronze medal position, with Ukraine's Ganna Melnichenko leading on 3912 with three events remaining.

Johnson-Thompson said: "I had a good start in the hurdles with 13.49, and I was quite happy with where I finished in the 200m, it was just the high jump and shot put that let me down."

Although Minichiello believes in Johnson-Thompson's potential, he thinks a medal in Moscow remains a tall order for her this early in her career.

He added: "I think that a medal will be a stretch for her, I think a top-eight finish is what you are looking at."

Meanwhile, Ennis-Hill, 27, finished fifth and eighth respectively in the heptathlon at the 2003 and 2004 World Youth Championships, having led both at the end of the opening day.

Olympic champion Ennis-Hill wished her compatriot all the best for the World Championships, writing on Twitter: "So strange not to be out there at the worlds! Wishing @JohnsonThompson lots of luck though. Good start :)."