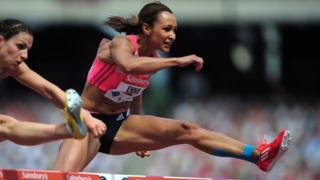 Olympic heptathlon champion Jessica Ennis-Hill says she is "disappointed" with her fourth-placed finish in the 100m hurdles at the Anniversary Games.

The race inside the Olympic Stadium was won by Australia's Olympic champion Sally Pearson in 12.65 seconds, followed by Britain's Tiffany Porter (12.76) and Kellie Wells of the USA (12.95).