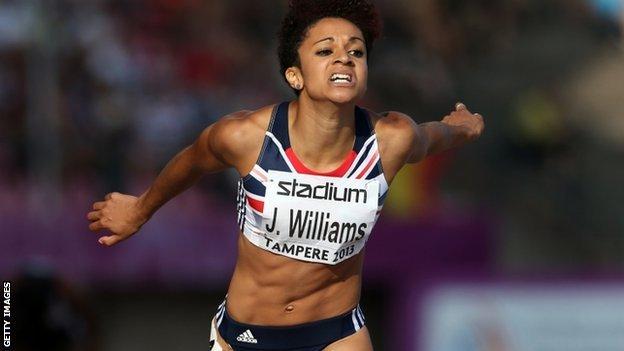 Great Britain's Jodie Williams and Sophie Hitchon both won gold at the European Athletics Under-23 Championships in Finland.

"I'm over the moon and getting quite emotional," said 22-year-old Rodger. "That's an A standard for [the World Championships in] Moscow, which I wasn't expecting, so we'll have to wait and see."

Talbot, 22, also ran an A standard in the 200m as he finished 0.05s behind Polish winner Karol Zalewski.

"The only criticism I have of my race is that I maybe dipped too early because I wanted to get there so badly, so maybe that cost me a few hundredths but I don't think it would have affected the result," he said.

"I've run two A standards and I beat two good guys here so I'll have to see what happens [on Sunday in the 200m at the British Championships]."

Hitchon was relieved to win the hammer after starting as the favourite and triumphing with her final throw of the competition.

The 21-year-old, who set the British record with a throw of 72.97m at the European Team Championships earlier this year, said: "I do it to myself all the time; to qualify at the Olympics, at the World Juniors to win, always leaving it to the last throw. I don't know why I do it to myself, it's so stressful.

"My first two throws were great and then I lost it in the middle two rounds. I knew if I just relaxed I could win and I did."

Hitchon will be going to Moscow, while Williams, who also ran the A standard time in the 200m, said she had "a decision to make".

Williams, who missed out on the London Olympics after injuring herself at last year's trials, had already won 100m silver on Friday.

"I was disappointed after yesterday, not because I lost but because I didn't really feel like I did my best," she added.

"So in the 200m I just wanted to come out and absolutely smash it. My legs were knackered on the start line, but I just legged it on the bend and held on."