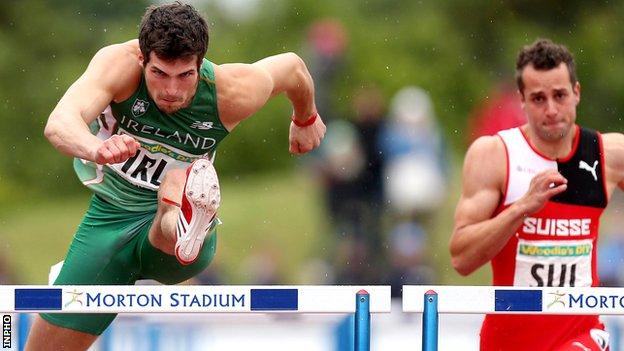 Ireland finished in a best-ever position of seventh at the European Athletics Team Championships First League meeting at Santry in Dublin.

The Irish team finished on 242 points, with the Czech Republic winning on 351.5, Sweden second on 311 and the Netherlands third with 299.

Among the highlights of the second day was a 110 metres hurdles heat win for Holywood athlete Ben Reynolds.

The results saw Reynolds take third overall in his event, while Foster was ninth overall.

The men's and women's 4x400m teams were both successful in their heats to provide a strong finish for the host nation, the men picking up a maximum 12 points and the women 10 points.

Jason Harvey was part of the men's 4x400 group.

Ireland went into the second day lying in sixth position, but will be happy to have comfortably secured their First League status.

Reynolds secured 10 points by winning in a time of 13.71 seconds, a quarter of a second faster than the time he clocked at the Northern Ireland and Ulster Championships at the Mary Peters Track last week.

The time was a new Northern Ireland record, which took .04 seconds off his own two year old record and ensured qualification for next year's Commonwealth Games.

Among the other notable Irish performers on Sunday was David McCarthy, who took fourth in the men's 3000m.

Gregan was an emphatic winner and received a rapturous reception from the Dublin crowd, who appreciated the efforts of their young team.

The competition is the second tier of the European team competition and Ireland needed to finish in the top 10 to avoid relegation.

The top three teams from the event, which Ireland was hosting for the sixth time, are now promoted to the Super League.