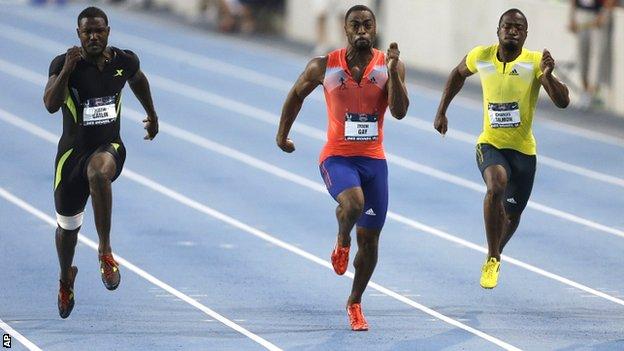 Tyson Gay eclipsed Justin Gatlin and clocked the fastest 100m of the year to win the US World Championships trials.

Bolt booked his place in Moscow (10-18 August) by winning the Jamaican championship in 9.94.

Gay, who had hip surgery in 2011 and was second to Gatlin in last year's US Olympic trials before finishing fourth at London 2012, took control midway through this year's US final in Des Moines.

"It's been five years since I have been the US champion and it feels good to be back on the podium," he said.

"I'm not as sharp as I could be but I'm healthy so that's all that counts."

Olympic bronze medallist Gatlin, who beat Bolt by one-hundredth of a second to win in 9.94 in Rome, said he was affected by a strained right hamstring.

Charles Silmon captured the third spot on the American team for the championships by edging Mike Rodgers by two thousandths of a second.

London 2012 silver medallist Yohan Blake missed the Jamaican trial in Kingston because of a thigh injury but qualifies for Moscow as the defending champion.

He won in South Korea two years ago after Bolt was disqualified for a false start.

Bolt recovered from a slow start to catch Nickel Ashmeade at the 50m mark and clocked a time of 9.94 seconds after easing off over the last 10m.

The sub-10 second run was the 35th of his career and the 26-year-old said: "It was good to win... I'm not too worried about the time as I have one solid month to work on getting ready for Russia."

Asked about Gay's impressive run, Bolt said: "The trials are always [about making] the team, because it's at the (World) Championships [where] it really matters. I had ran 9.63, 9.58, so I have set the (Worlds qualifying) standard already."

But former world record holder Asafa Powell, troubled by hamstring problems this season, failed to fire in his third straight race in two nights, and could only finish seventh in 10.22.