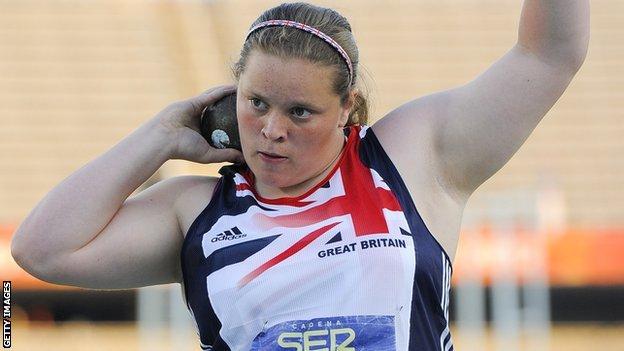 The 18-year-old will join Olympic gold medallists Mo Farah and Greg Rutherford in Gateshead this weekend.

She told BBC Radio Norfolk: "Being alongside names like that is going to be such a brilliant experience.

"Hopefully I'll learn a lot from them and apply to it other competitions later this year."

McKinna, under the tutelage of former Commonwealth Games champion Geoff Capes, has dominated the junior ranks of her sport in Britain.

She currently leads the national rankings with her throw of 17.12m in Germany last month, making her only the third British woman to throw more than 17m in the last 23 years.

And now the Great Yarmouth athlete will be handed her first senior GB vest in front of the television cameras.

"This is going to be completely different. This is a championship so it will be an amazing experience," she said.

"It's the next level up and it's everyone's ultimate goal to compete at the highest level.

"It's the biggest event I've ever competed in.

"Being live on the TV is going to be a new experience. I'm sure I can take it in my stride and it can go as well as I hope."

McKinna, who could only manage 16.52m at the England Under-20 Championships in Bedford last week, is hoping for a strong performance in Gateshead ahead of the European Youth Championships in July.

"We will come back and do a nice solid block of training and hopefully we will get back up to the 17m mark and contend for a medal at the European Junior Championships," she said.