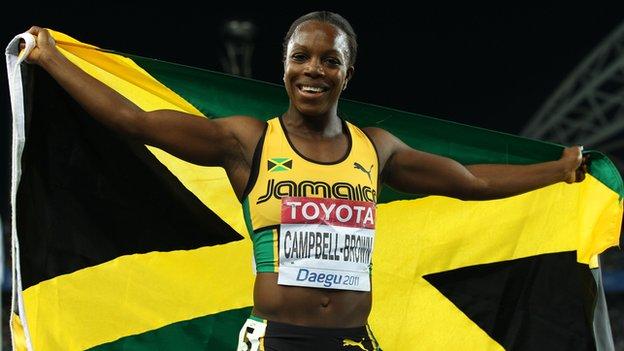 A sample taken from the 31-year-old at the Jamaica Invitational on 4 May tested positive for a banned diuretic - something which is viewed as a masking agent by the World Anti-Doping Agency.

She now faces a possible two-year suspension from athletics.

At London 2012, Campbell-Brown took bronze in the 100m and was a member of Jamaica's silver medal-winning sprint relay team.

Diuretics, which promote the production of urine and are used to help high blood pressure, are banned because they can be used by athletes to hide other performance-enhancing substances.

"In a country renowned for producing great sprinters, Campbell-Brown is one of the best ever," said BBC Radio 5 live's athletics correspondent Mike Costello.

"She's twice won Olympic gold over 200m and world titles over 100m and 200m, but now her reputation has been shredded and the damage done to the credibility of Jamaican athletics in general is extensive.

"She has complained in the past that modern-day female athletes have been denied commercial opportunities because many women's world records have been set by drug-tainted Eastern Europeans, and therefore beyond reach. Now she belongs in the same hall of shame."

News of Campbell-Brown's positive test emerged 48 hours after her compatriot, the 400m runner Dominique Blake, received a six-year ban for her second doping violation since 2006.