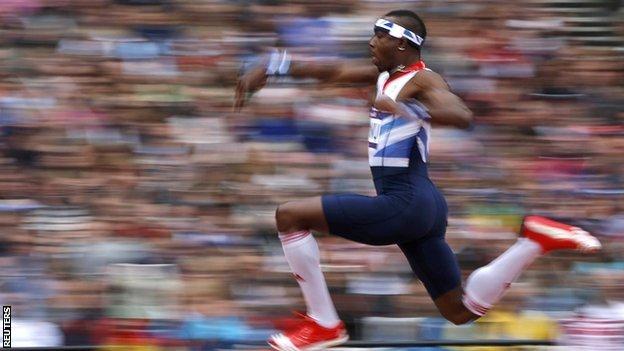 UK Athletics performance director Neil Black says triple jumper Phillips Idowu is not upset about his omission from the squad for next weekend's European Team Championships in Gateshead.

Idowu, 34, had indicated he was eager to compete but has been overlooked in favour of Nathan Douglas.

"Phillips was available but he has a very minor heel irritability and he hasn't jumped as far as other people at this stage of the season," Black said.

"Phillips is completely cool about it."

He added: "It was a sensible consideration of who was in the best position to compete and do the best performance here in Gateshead in a week's time, and the selection panel decided to choose Nathan Douglas.

"Phillips understood that he was unlikely to be selected, and he is focusing on getting ready for the trials and the World Championships."

Idowu fell out with former GB head coach Charles van Commenee prior to last year's London Olympics, and has competed only once since then, finishing seventh at the Diamond League meeting in Rome last week.

Olympic champions Mo Farah and Greg Rutherford will lead home hopes in the 12-team event, which takes place on 22 and 23 June.

Perri Shakes-Drayton, 24, will captain the team and run in the 400m.

Former world and Olympic champion Christine Ohuruogu, 29, a silver medallist at London 2012, will run in the 4x400m relay along with her younger sister Victoria, while Robbie Grabarz, 25, who won Olympic bronze in the high jump, and world 400m hurdles champion Dai Greene are also in action.

Outgoing head coach Peter Eriksson said: "In selecting the team, we prioritised athletes who would give us the best possible chance to win this prestigious competition.

"I am delighted that our athletes have made this event a key part of their summer campaign."

She said: "I'm so pleased to be selected as team captain and proud for myself and my coach.

"It's always pleasing if you can be seen as a leader and a good example for your team-mates. I hope I can use my experience to help guide some of the new team members as we try to win the title in front of our home crowd."