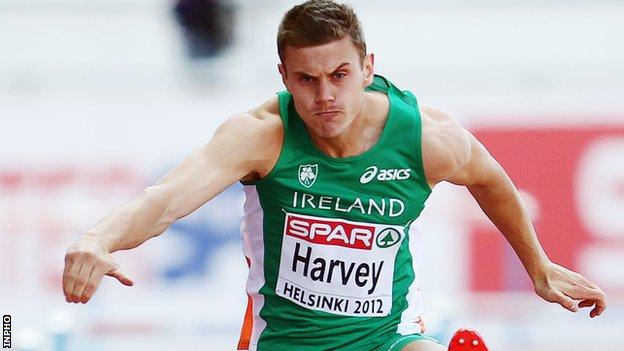 Jason Harvey edged closer to the 50-second barrier in the 400 metres hurdles when finishing third at a meeting in Belgium on Saturday evening.

Northern Ireland athlete Harvey clipped .38secs off his personal best as he clocked 50.27 in Oordegem.

Harvey's time was a Commonwealth Games qualifying standard and bettered the European Under-23 Championship mark.

The 21-year-old made a breakthrough last season when he qualified for the European Championships in Helsinki.

His early-season form suggests he is continuing to make progress.

In the US, Jason Smyth's early-season frustrations continued as he was hindered by a back twinge at a meeting in Florida.

Smyth's heat time of 10.31, which had an illegal following wind of 2.6 metres per second, was only good enough to earn him a place in the B final at the Star Sprint Series meeting in Montverde.

The Paralympic star then appeared in some discomfort as he was only able to clock 10.45 despite another strong following wind of 4.1mps.

Given the conditions, a number of the competitors produced quick performances with Jeff Demps clocking 9.99 in the A final to pip Smyth's regular training colleague Gerald Phiri of Zambia (10.00).

In previous seasons, Smyth has had the measure of Phiri over 100m but he has not been able to keep pace with the Zambian on a couple of occasions over the past month.

Other notable Irish performances over the weekend included a solid season opener from 400m man Brian Gregan at the Flanders meeting.

Gregan clocked 45.82 to take victory which was a decent run given the chilly conditions in Belgium.

Letterkenny athlete Mark English also produced a solid performance as he clocked 1:46.82 to take second place in the 800m in Oordegem.

Running in Geneva, Sarah Lavin improved her Irish junior 100m hurdles record to 13.45 after earlier clocking 13.50 at the same meeting.

In fact, Colvert was not the fastest Irish 200m performance of the weekend as Carlow youngster Marcus Lawler clocked a remarkable 20.87 to win the senior event at the Irish Schools Championships in Tullamore.

Even more remarkably, Lawler, who is coached by his mother and former Irish sprint champion Patricia Amond, clocked his 200m time despite running into a wind of 1.8mph in the home straight.

Also over the weekend, North Belfast athlete Stephen Scullion dipped under the 14-minute mark over 5,000m for the first time as he clocked 13:58.55 at the British Milers Club meeting in Manchester while Eddie McGinley set a personal best of 14:07.60 in the same race.