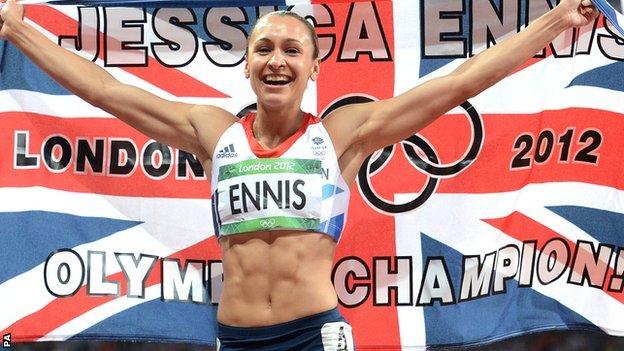 Jessica Ennis will take part in the London 2012 Anniversary Games at the Olympic Stadium from 26 to 28 July.

The 27-year-old, who won the heptathlon at last year's Olympics, appears along with fellow British gold medallists Greg Rutherford and Mo Farah.

Ennis competes in the 100m hurdles and long jump at the £429m venue.

"I have amazing memories of competing in the Olympic Stadium and it will be good to step out on that track again in front of a British crowd," said Ennis.

"I'll never forget the noise the crowd made when I competed last August and know that the draw of the stadium and the great line-up of athletes will fill the stands and make it another incredible occasion.

"I am training hard and am getting excited about the prospect of getting out there and competing again this summer."

The event will double as the 2013 London Grand Prix, which usually takes place at Crystal Palace, and will be held on the anniversary weekend of the opening ceremony of the London 2012 Games.

Team GB's five track and field medal winners at London 2012 will also compete, along with 14 of Britain's 16 Paralympic medallists.

There is also the prospect of Olympic 100m, 200m and 4x100m relay champion Usain Bolt appearing at the Games.