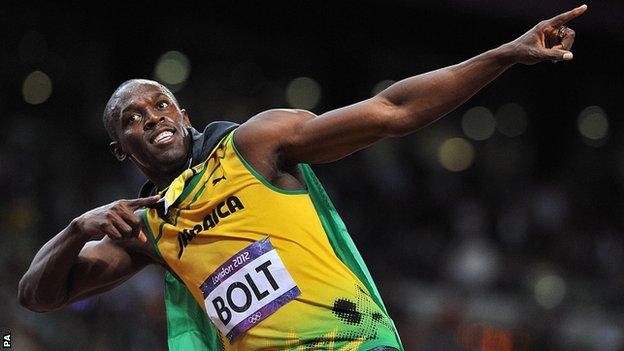 Usain Bolt could appear at the London 2012 Anniversary Games in July after the sprinter's agent revealed "positive negotiations" had taken place.

Other than the Olympics, Bolt has not raced in Britain since 2009 because of tax rules which would force him to give up a share of any appearance or prize money and a cut of any endorsements.

However, the exemption for "non-resident athletes" in the Budget has removed that financial constraint.

The annual two-day Diamond League meeting will be held on Friday 26 and Saturday 27, followed by a day of Paralympic events.

Jamaican superstar Bolt, 26, won three gold medals at London 2012 - setting an Olympic record in the 100m and helping his team-mates create a new world record in the 4x100m relay.

Organisers now hope he will return to the UK as part of his build-up to the World Championships in Moscow a fortnight later.

"We are having positive negotiations but still have some things to finalise," Bolt's agent, Ricky Simms, told BBC Sport.

Bolt is currently preparing to better his world record over 150m on Rio de Janeiro's famed Copacabana beach on Sunday.

He set the world best of 14.35 seconds over 150m at an exhibition race in Manchester in 2009, and will now race on a track laid over one of the world's most iconic beaches.

"It will be my first speed event of the season," he said. "I've already had the chance to run on a track laid in the street (in Manchester) but it'll be interesting to run at Copacabana."