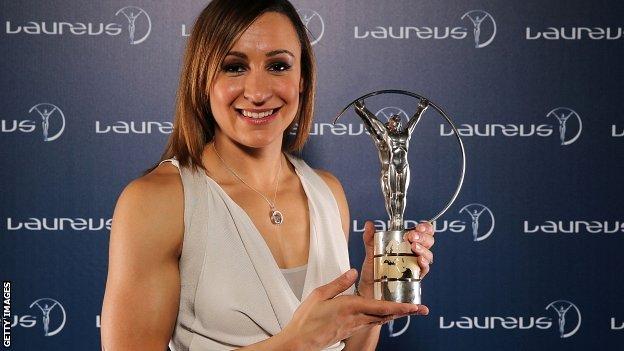 Britain's Jessica Ennis has been named World Sportswoman of the Year at the Laureus Awards in Rio de Janerio.

London 2012 chairman Sebastian Coe picked up the Lifetime Achievement Award, while Andy Murray won the World Breakthrough of the Year Award after his US Open and Olympic success.

London was a good experience, everything went well, and I'm sure it will be completely different for Rio

Murray said: "It was an amazing year - my first grand slam in New York and two medals at the Olympics in my home country.

"I would have taken that at the start of the year, that's for sure.

"The British team had such a great Olympics and I watched loads of medals being won by the British athletes. I think I was motivated by that."

Ennis, who set three personal bests and a British record of 6,995 points in London and is the second British woman to win the award after double Olympic champion Kelly Holmes triumphed in 2005, added: "I don't think I'll have that kind of pressure again.

"It was a good experience, everything went well, and I'm sure it will be completely different for Rio."

Jamaican sprinter Usain Bolt was crowned World Sportsman of the Year for a third time after he won 100m, 200m and 4x100m gold in London.

Brazil's multiple Paralympic champion swimmer Daniel Dias was named World Sportsperson of the Year with a Disability for a second time after winning six Olympic golds in London.

Austrian skydiver Felix Baumgartner won the World Action Sportsperson of the Year Award after becoming the first human to go through the sound barrier last October.

Proceeds from the Laureus World Sports Awards underpin the work of the Laureus Sport for Good Foundation, which supports 89 community sports projects around the world including 10 in the United Kingdom.