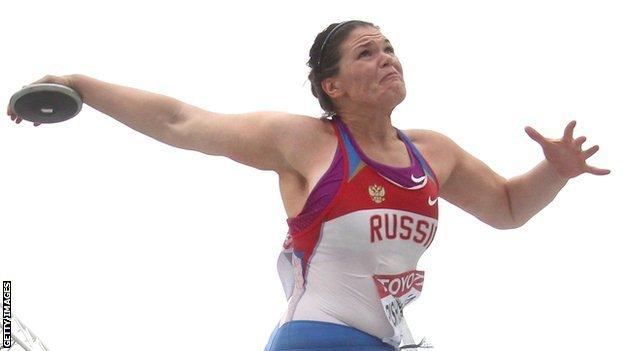 The Russian anti-doping agency (Rusada) has revealed the 27-year-old tested positive for an anabolic steroid.

But she could face a life ban from the sport if found guilty because it would be the second time she has committed an offence.

She served a doping ban of two years and nine months from July 2008 to April 2011 after testing positive for Methylhexanamine.

In a statement on its website, Rusada said: "On the basis of the test result from the (World Anti-Doping Agency) WADA-accredited laboratory in Lausanne, the IAAF has temporarily suspended Pishchalnikova from October 31."

Pishchalnikova claimed silver at this year's Olympics in London and the world title in Daegu, South Korea in 2011.

She also won silver at the 2009 World Championship in Osaka, Japan, but was stripped of the medal after the IAAF annulled all her results from May 2007.