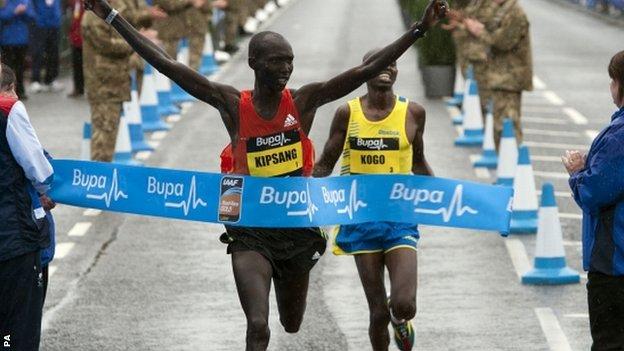 Kipsang, who took bronze in the London Olympic marathon, produced a late surge to pass Kogo and win the half marathon in 59 minutes and six seconds.

"What an athlete Tirunesh Dibaba is, what an impressive debut.

"We could be looking at the future of marathon running."

Olympic 10,000m champion Tirunesh Dibaba of Ethiopia won the women's race on her half marathon debut. Jo Pavey was the first Briton home in fifth.

Kipsang may have missed out on gold in the Olympics but he and started the race as favourite.

He and compatriot Kogo broke clear of the field early on and Kipsang found a late finish to clock the second-best time round the Great North Run course.

"The finish was quite fantastic. I decided to sprint," said Kipsang.

"Towards the last part I believed in myself and I got the feeling that I could sprint.

"For me winning this race is really good for me. It was my first time running in the GNR and I really enjoyed the race. There were a lot of people cheering and it was fantastic."

In the elite women's race, Dibaba won in a time of 1:07:35 in a hugely impressive first competitive race over the distance.

Dibaba, 27, has won five Olympic medals on the track but could now become a force on the roads after a trademark sprint finish saw her beat Kenya's Edna Kiplagat into second place, with Olympic marathon champion Tiki Gelana third.

Dibaba told BBC Sport: "It was a good race. The course was good for me on my first half marathon.

"I enjoyed it. At the last minute we had rain but there is nothing you can do about that.

"Hopefully next time I can run a faster time and I am thinking of running a marathon next year."

"I really enjoyed this year. Running in the Olympics was awesome and today was such a tough field. I look forward now to a marathon in the autumn."

In the biggest ever Great North Run, 39,953 people crossed the start line as Olympians