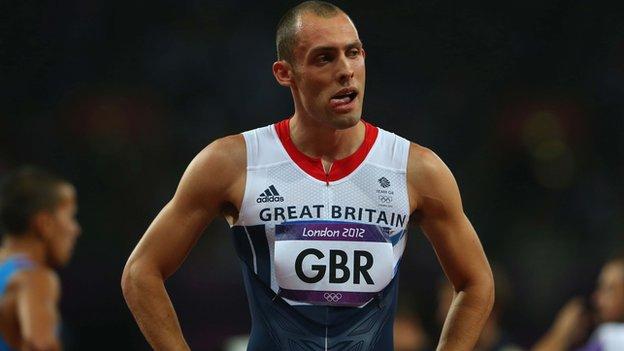 Dai Greene believes he will still be among the world's best when London hosts the World Championships in 2017.

Greene, the GB athletics Olympic team captain, was a favourite to win a gold medal at London 2012 but finished fourth in the 400m hurdles final.

The Welshman also intends to put his Olympic heartache behind him and go for gold at Rio 2016.

"I will be going on until 2017, when the World Championships are in the UK," said 26-year-old Greene.

"I still have time left in me."

Greene has won every major title on offer in the 400m hurdles apart from a Olympic gold medal.

His desire to win means he is already thinking about the next Olympic Games in Rio, while also taking inspiration from London gold medallist Felix Sanchez, who beat the world's best two weeks before his 35th birthday.

"My discipline is one that age and experience can definitely help. I will be training for another four years at least."

American Michael Tinsley was second with Puerto Rico's Javier Culson securing bronze, while Greene finished out of the medals in fourth.

But he says his bid for gold on home soil on the biggest stage of all was hampered by a virus and knee surgery.

"I was rushing trying to get back," said Greene, who hails from Llanelli.

"When the Olympics came around, I just didn't have the fitness to last a few rounds. It was the most difficult year for me to prepare for the biggest competition of my life.

"It was unfortunate that it happened that way but I couldn't have given any more."