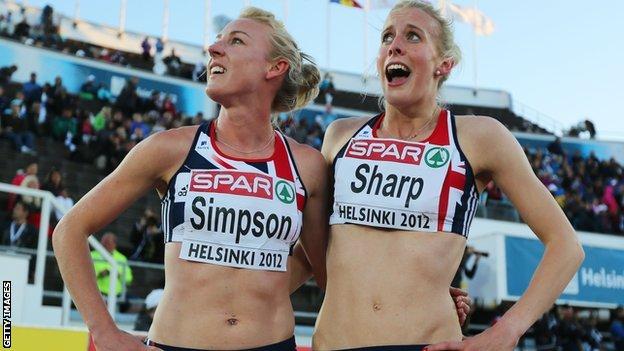 Jemma Simpson has encouraged all the 800m runners who were overlooked for Team GB's London 2012 squad to appeal.

"I think there is grounds for all four girls that haven't been picked for the team to appeal," she told BBC Cornwall.

Simpson, Meadows and Okoro have run the 'A' standard while Sharp has only run the 'B' standard.

Under selection rules, Great Britain cannot pick a mixture of runners who have and have not achieved the 'A' standard.

"I've sent my letter and I hope everyone else does too," Simpson added.

"Four athletes have been sacrificed for one. One showed current form and the selection process is so extensive you could have picked any one of the four, I don't know how they came to their decision - I think it's the wrong decision.

"Lynsey deserves a place. In a home Games when there's an option for three places you have to fill the spots, [so the team has] three chances to get to the final.

"The British public like to see a full team out there - it is in the spirit of the Games.''

Simpson was seventh in the final of the European Championships last week, a race in which Sharp finished second.

The Cornish-born runner had her lottery funding cut last year and has been training in the United States in a bid to make Team GB.

"The conclusion has come as a shock to most people that I've heard from," Simpson said.

"That's what I hope people who haven't been picked for the team will do."

The 28-year-old feels that Team GB's selectors should give British athletes the chance to prove themselves in front of their home crowd in London.

"It's not set in stone, you can't put medals around people's necks until the championship has taken place," she added.

"In the sprint events Usain Bolt false starts and he's out, someone else gets the gold medal and it's the same here.

"It's important to give British athletes the best opportunity you can to represent the country and put themselves on the start line in a position to at least fight to get to the final and fight to get a medal."