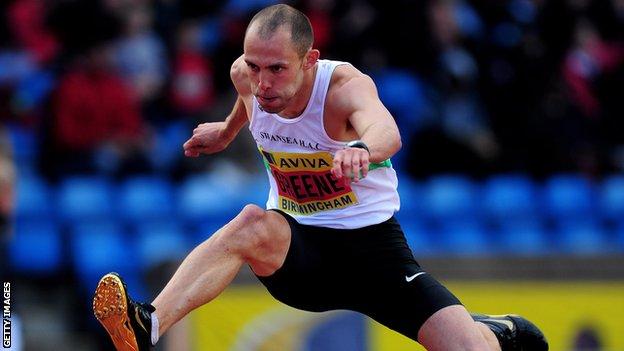 Greene and 200m sprinter Christian Malcolm were the two Welsh athletes that booked their Team GB places at the British Trials in Birmingham.

European silver medallist Malcolm will compete at his fourth Olympics after finishing fifth in 2000 and 2008.

The British team is to be named on 3 July after the European Championships.

It will be a great experience this summer. I have a few things to work on so it's very promising

Greene shrugged off some poor early season form to prove the European and Commonwealth champion is still a class act and claimed victory in the 400m hurdles final.

Welsh rival Rhys Williams failed to qualify after falling at the penultimate flight of hurdles in the home straight of the final.

The European runner-up has run the Olympic 'A' qualifying standard but now the 28-year-old must wait to find out if he will get a discretionary place on the team.

Greene, who recently revealed he had a knee operation last December, ran 49.48 seconds to finish four tenths of a second clear of rival and training partner Jack Green.

"It's nice to finally make my first Olympic team," said the 26-year-old.

"To be honest I wanted to run a bit faster but it just wasn't there.

"Maybe I was a bit complacent and went out at the speed of the guys outside of me, but I'll be in a great shape by the time the Games come round - I see the times dropping in training every week.

"It will be a great experience this summer. I have a few things to work on so it's very promising."

Malcolm secured his place at his fourth successive Olympic Games with a second place finish in 20.63secs in the 200m final.

But Malcolm, who came fifth in the 100m final and failed to qualify for that event, will be disappointed he lost his 200m British crown to James Ellington.

"I said that this weekend was all about qualifying," said Malcolm.

"I always like the double, as you know. For me I always keep in good shape for the major championships.

"If you can put five hard races like that back to back then you've got some good training that will prepare you for the major champs."

Gareth Warburton has run the A standard but the Welshman finished fourth in the 800m final in Birmingham so must rely on the selectors if he is to picked alongside Andrew Osagie.

Brett Morse recorded a season's best to finish second in the Discus final - but Morse has until 1 July to throw the Olympic qualifying standard.

Sally Peake finished in third in the Pole Vault and Llanelli's Caryl Granville ran a season's best to finish fifth in the women's 400m hurdles final.

The GB team which will be announced after the European Championships in Helsinki on Wednesday.