One of my jobs during an important distance race is to keep a chart of the lap times as the race unfolds so the commentators Steve Cram or Brendan Foster - experts in interpreting such data - can stay up-to-date.

It was Brendan who, in 1974, threw in a 60.4 second eighth lap to crack the opposition in the 5000m at the European Championships. We want to spot any such developments as soon as possible.

There was no single pivotal moment like that in Birmingham on Sunday, though, when . He bided his time, edged in front at the bell and pulled clear to win comfortably.

What impressed onlookers most was not any statistic, but the way he and his training partner Galen Rupp turned the tables on the Ethiopian opposition. How many times have we seen Ethiopians sit in and kick for victory in the closing stages with non-African opposition trailing?

Steve CramBBC athletics commentator
I've known Mo for a long time and he's a very easy-going character who is very adaptable; Alberto has always said he is very coachable

In Birmingham, Farah and Rupp gave them a taste of their own medicine. On the last lap, Imane Merga and Yenew Alamirew pulled well clear of everyone else in the race but were themselves left trailing by the Briton and American.

Yes, Olympic and world champion and world record-holder Kenenisa Bekele was not there, nor were any Kenyans who are preparing for their championships this weekend. But Merga was the world number one over 5000m last year and is the reigning world cross-country champion. Farah has defeated him twice this year.

Looking at my timing chart of the closing stages, I could not help noticing parallels between the Mo's victory and that of Bekele in the last Olympic Games and World Championships.

It does seem that Alberto Salazar - the coach of Farah and Rupp - has equipped his athletes with similar weaponry to that which was deployed in those races: not a mid-race break or a furious sprint during the last lap, but a sustained finishing surge involving a final mile of around four minutes, with progressively faster laps.

We cannot yet say that Mo is in the same class as Bekele, but when the Ethiopian legend returns to racing he may find that there are more men ready to take him on at his own game. 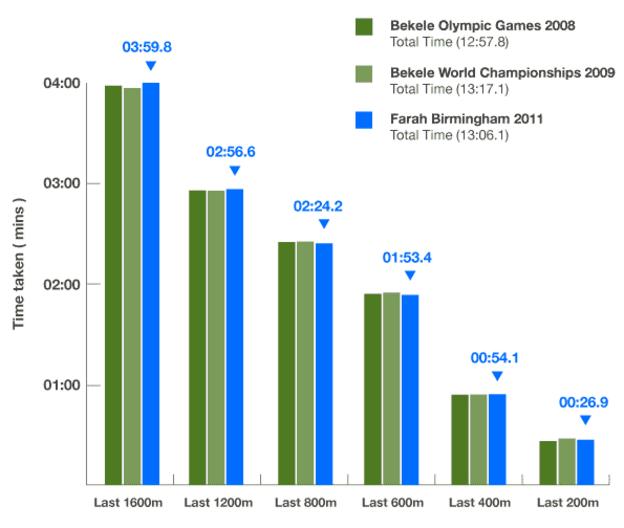