Tom Brady's position as the greatest of all time was already secure even before he led the Tampa Bay Buccaneers to an emphatic victory against the Kansas City Chiefs on Sunday. But the widely heralded NFL GOAT's achievement in winning a seventh Super Bowl may just be the greatest of the lot.

"It's hands down one of the greatest sporting accomplishments in sports history," said his team-mate Rob Gronkowski. "I'm not going to say it's the greatest but it's up there."

That's a huge statement when you consider what Brady's done in his career - appearing in 10 Super Bowls with five MVP awards, that miraculous comeback from 28-3 down against the Atlanta Falcons in 2017 and a perfect 16-0 regular season with the New England Patriots in 2007.

Brady's now won a Super Bowl in three different decades and won more titles than any team has managed in history, but winning it with this team, this way, in this season of all seasons merits special consideration.

And all his previous achievements came alongside Bill Belichick at the Patriots, and maybe there was a point to prove as he packed up his things and headed to Florida. At 43, Brady went to a new home, new team, new coach and new scheme - perhaps you can teach an old dog new tricks.

He took a huge gamble trading the Patriots' winning ways for a Bucs outfit without a play-off appearance in 13 years.

The move came during a global pandemic that left him unable to connect with his team-mates in his first pre-season as Tampa Bay struggled - with defeat by the Chiefs at the end of November leaving them at 7-5 just before their bye week.

They've won every game since. They won three away games in the play-offs and finished off with a record three straight wins over Super Bowl MVP-winning quarterbacks in Drew Brees, Aaron Rodgers and Patrick Mahomes.

'The greatest professional athlete we have seen in history'

"Tom Brady should be the first player in history to be in the Hall of Fame while he's still playing," said two-time Super Bowl champion Osi Umenyiora on BBC One.

"What this man has done this year is almost beyond belief, almost beyond words. I cannot describe the level of difficulty, what it took for this man to do what he's done.

"Every single year this guy's been doubted, every single year this man rises to the top like a phoenix. This guy is the greatest professional athlete we have seen in history, and this goes for any sport. And I'm not just saying that to be hyperbolic. What this guy is doing in the quarterback position - the hardest position to play in sports - winning over and over again... my hat's off to this guy." 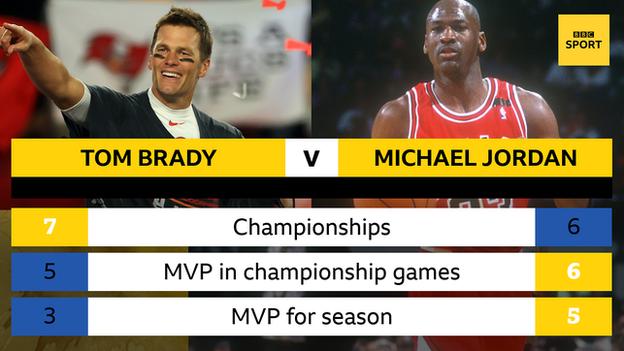 It's such a subjective topic, defining greatness, and it's even harder in team sports - switch Mahomes and Brady in the Super Bowl and you likely get the same, if not more emphatic, outcome, but it's how Brady got his team that far that was so special.

That desire to win still burns bright and that chip on his shoulder from only being the 199th pick of the draft in 2000 is still pushing him on, but even more than that, it's Brady's ability to elevate those around him that sets him apart from the rest.

And that's the intangible about Brady, something you can't quantify by checking the box score or in his stat lines, that he just makes players better, he makes teams better. He demands players give their best each and every day; he leads, he inspires and, ultimately, he wins.

His mere signing for Tampa Bay gave a shot in the arm to the team with the league's worst winning percentage, and boosted a set of players who had largely grown up watching Brady win Super Bowls. Now he was their team-mate and they'd do anything and everything to impress him.

"I remember the first time I met him this summer, going to work out at the private high school, not being able to get sleep the night before, just being nervous to meet him," receiver Scotty Miller told CBS. "After watching him for so long, it's just crazy to have this opportunity to play alongside of him."

There's also the impact having Brady on the opposite sideline has on the other teams, they suddenly had to take Tampa Bay seriously, and having him there waiting to do something special can alter gameplans and drain confidence.

The Chiefs trailed the San Francisco 49ers in last year's Super Bowl but always looked capable of a comeback - but as soon as they fell behind against Brady the body language was not great.

Even fiery defensive leader Tyrann Mathieu was stunned into silence when a fired-up Brady went head-to-head with him - Mathieu looked like he had just been told off by his favourite teacher.

"I never really saw that side of Tom Brady, to be honest," said Mathieu. "But whatever. No comment. It's over with. I'm done with it."

Brady did not end up in Tampa Bay by chance, and in signing a two-year $50m deal he actually came quite cheaply in the end.

He saw an opportunity to win with a team that had some great components but was lacking that winning knowhow and mentality. He had two 1,000-yard receivers like he'd never had in New England, and the Bucs already had the top-ranked running defence.

Brady then played recruiter, enlisting the help of old partner in crime Gronkowski by luring him out of retirement, and later helping to sign Leonard Fournette and Antonio Brown after their off-field problems.

Taking a chance on troubled stars in that way is a very Belichick thing to do, and as all three of Brady's recruits scored touchdowns in the Super Bowl, maybe we have to think it was the star QB and not the coach who built that dynasty in New England.

So it's one thing being a great sportsman, it's another being able to project that greatness on to others, to lift a failing franchise to the summit of the sport, and to do it all with a new team, in one season.

This could well be Brady's greatest ever achievement, and the bad news for the rest of the league is he's coming back for more next season.