The streets of Miami are ringing with talk of $5,000 tickets, hype around arguably the best player in the game today and being in the sights of more than 150m people worldwide. Not to mention JLo and Shakira - yep, it's Super Bowl time!

But who's playing, who are the favourites and where will the game be won and lost?

Make sure you join BBC Sport on Sunday night and follow the fun...

In the red corner are the San Francisco 49ers, who won five Super Bowls in 13 years across the 1980s and early 90s. Think Jerry Rice, Joe Montana and Steve Young. Since then - a long wait.

It's 25 years since their last Super Bowl win, coincidentally in the same stadium in Miami, with their last appearance at the end of season party ending in thrilling defeat at the hands of the Baltimore Ravens seven years ago.

In the, err, also red corner, are the Kansas City Chiefs, who make the Niners' 25-year wait for glory seem like a mere blip. (Both sides normally wear red but as the designated 'home' team in Miami, it's the Chiefs who will be in their usual colours, meaning the 49ers will have to wear white.)

It's 50 years since the Chiefs' sole Super Bowl win and their fans have understandably hit Miami in numbers. Will they be celebrating come full-time though? It's a tough game to call this year. 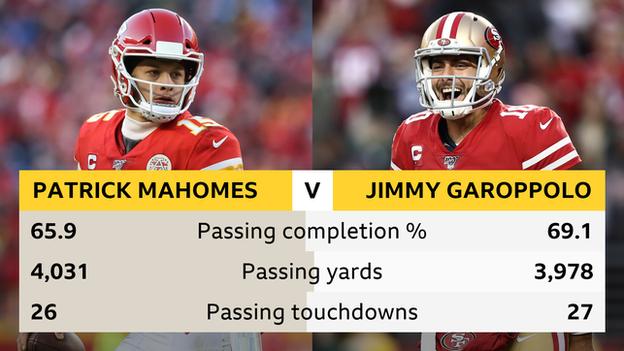 It's reductive to bring the Super Bowl down to the two quarterbacks but the fact remains that they are often the key players on the night. After all, a quarterback has been named Superbowl MVP on 29 occasions from the previous 53 events.

In Patrick Mahomes, the Chiefs may well have the best QB in the business. Last year's overall MVP has been in sparkling form again, slinging no-look passes and making plays with his left hand - and his feet too. Check out his superb touchdown in the play-off win against Tennessee.

Mahomes is still only 24 - he'll be the fifth-youngest QB to start a Super Bowl, and would be the second-youngest to win it - and his 87 touchdown passes so far are the most for any player in their first 35 games. His baseball background makes him unorthodox and exciting to watch.

"His performances have been no surprise," wide receiver Tyreek Hill said this week.

"I saw it on day one in training camp, he was making some crazy throws. In the rookie year most guys are happy just to be there, not him.

"He had the right mindset, right attitude, he wasn't scared to make a throw. To be part of this offense is a blessing for me, my job is easy. I just go out there and run and the MVP QB finds me."

Expect a very different approach from Mahomes though - while the Chiefs' playmaker throws the ball to all avenues, Jimmy G attempted just eight passes in the 37-20 win over the Green Bay Packers in the NFC Championship game, the fewest in a post-season game since Miami Dolphin Earl Morrell in Super Bowl VI (six).

Garoppolo and the Niners may rely again on their superb running game, but the quarterback is more than capable of taking the ball in his own hands if needs be.

"I'm still progressing, still learning and growing as a quarterback," he said.

"There is a long way to go, I'm just getting started. A year ago I was learning how to run again [after a serious knee injury sustained against the Chiefs], it makes you realise how special this moment is. You don't know if you're ever going to be back again."

Legacy or legendary? The coaches

The contrast between the franchises extends to the men under the headsets - the Chiefs are coached by Andy Reid, a 61-year-old veteran boasting nearly 30 years of NFL experience and with more NFL wins under his belt than any coach not to win a Super Bowl.

He coached the Eagles when they lost in 2004 and could become the fourth man to coach multiple Super Bowls without a win. Much of the media chatter around him in Miami this week has been about the 'l word' - legacy.

In the other corner is a man who knows all about that - Kyle Shanahan is just 40, in his third season as a head coach but son of a Super Bowl-winning coach in Mike Shanahan.

They could become the first father and son duo to win a Super Bowl, come Sunday - Kyle was a ballboy when the 49ers last won the trophy and has grown up around the game's showpiece event.

"I used to try and take a week off school, my parents wouldn't let me but mentally I did."

The 49ers hardly threw the ball against the Packers when they booked their place at this Super Bowl - they didn't have to.

Raheem Mostert, a running back on his seventh NFL team in just five years, rampaged through the Packers, scoring four touchdowns and rushing for 220 yards, the second-most ever in an NFL post-season game.

The keen surfer, born in the shark-bite capital of the world just 260 miles north of Miami, is some character. He worked night shifts in Burger King after failing to make the grade and carries a list of the six teams who cut him to every game for motivation - not to mention the fact that he has a bible verse tattooed on his chest.

Yea, though I walk through the valley of the shadow of death, I will fear no evil: for God is with me.

"I honestly thought at the start of the season I would seize my moments to help the team win, I wasn't expecting this breakout year," he said.

"There are no 'me' guys on this team. We are like a locomotive, we all work as one. You will see that come Sunday."

Mostert will have his grandfather in attendance on Sunday, his biggest fan who used to record all of his games onto VCR but will upgrade to a digital copy for his grandson's Super Bowl show.

'You have to have some mental stability'

Everywhere you look on Sunday there are weapons. Mostert is one man to watch, the Chiefs have star wide receiver Tyreek Hill, who's so quick he wants to run in the Olympics, while tight ends Travis Kelce and George Kittle and Chiefs' running back Damien Williams could all prove to be game winners. Not to even mention on the defensive stars on both sides.

And yet it could all come down to one kick.

Robbie Gould is the kicker for the 49ers, as individual a role as it can get in a team game but backed by 18 family members in Miami. Miss a few in a row and you lose your job. Boot the winning points on Sunday and you're a hero.

"I played soccer in centre midfield and didn't start playing NFL until my sophomore year at high school - now I'm at the Super Bowl," he said.

"It's hard, there are only 32 spots in the league as a kicker, you have to have some mental stability and not think that your next kick could be the end of your career.

"Trust your training, go out and have fun and be confident."

Gould told me he didn't care if he kicked the winning points or if the Niners won by 30 points, as long as they won.

I didn't believe him. But somebody will be the hero by the end of play deep into the small hours of Monday morning, UK time. Make sure you watch.