The New Orleans Saints made it nine wins in a row in their seemingly relentless march towards the Super Bowl by inflicting a record 48-7 defeat on the Philadelphia Eagles, the reigning champions.

Drew Brees, the Saints' 39-year-old quarterback, scored four touchdowns to help hand out the worst defeat for any defending Super Bowl champions, and could well be an Most Valuable Player Award contender with many more performances like that.

It has been a tough year for the Eagles who now have a 4-6 record and are barely clinging on in the play-off race. Questions will be asked of head coach Doug Pederson if they become just the seventh Super Bowl winners to slump to a losing record the following season.

The Saints are looking one of the most likely sides to replace the Eagles as Super Bowl champions as they topped 40 points for the sixth time in 10 games - another NFL record.

"It blows my mind, too, trust me," said Saints defensive tackle Sheldon Rankins. "I think everybody knows how special we can be and everyone knows the end goal. If everybody here isn't thinking Super Bowl then they're in the wrong locker room."

Brees was at the helm when the Saints won their only Super Bowl in 2009 and, on current form, he could them back to the big game in February - a few weeks after his 40th birthday.

The Pittsburgh Steelers produced a remarkable comeback to beat the Jacksonville Jaguars 20-16 in the final seconds, despite being held scoreless for almost 43 minutes.

Steelers quarterback Ben Roethlisberger dived over the goal-line with five seconds left on the clock to complete a 20-point surge from Pittsburgh. It sealed a sixth win in a row and condemned the Jacksonville Jaguars to a sixth straight defeat.

The Baltimore Ravens kept in touch with the Steelers as young quarterback Lamar Jackson marked his first start by helping them win their divisional scuffle with the Cincinnati Bengals.

Although a quarterback, Jackson is a superb runner and carried the ball 27 times while throwing just 19 times. Baltimore leaned heavily on his scrambling ability to win 24-21, ending a three-game losing streak and taking them above the Bengals in the standings.

The Los Angeles Chargers lost for just the third time this season, beaten 23-22 at home by divisional rivals Denver after a last-second field goal from Broncos kicker Brandon McManus.

Andrew Luck, the Indianapolis Colts quarterback, extended his run of success against the Tennessee Titans to 10-0 and maintained his incredible touchdown run in a 38-10 victory to put his team in the play-off picture at 5-5.

In the AFC South, the Colts are still behind the Houston Texans, who made it seven wins in a row with a tight 23-21 victory at the Washington Redskins - who lost quarterback Alex Smith to a horrific leg injury.

Things are hotting up in the NFC play-off race after Brett Maher kicked a 42-yard field goal for the Dallas Cowboys as time expired against the Atlanta Falcons. The Cowboys' 22-19 win kept alive their season but just about ended the Falcons' hopes of playing the Super Bowl in their home stadium.

The Detroit Lions are well out of it but dealt the play-off hunting Carolina Panthers a blow with a one-point win. The Panthers lost 20-19 after their coach Ron Rivera's unsuccessful attempt to grab a two-point conversion in the final minute instead of kicking the easier one-pointer that would have sent the game to overtime.

In the NFC North, the Chicago Bears are surprise leaders, and look a decent bet to make the post-season after a tough 25-20 victory over the Minnesota Vikings at Soldier Field. 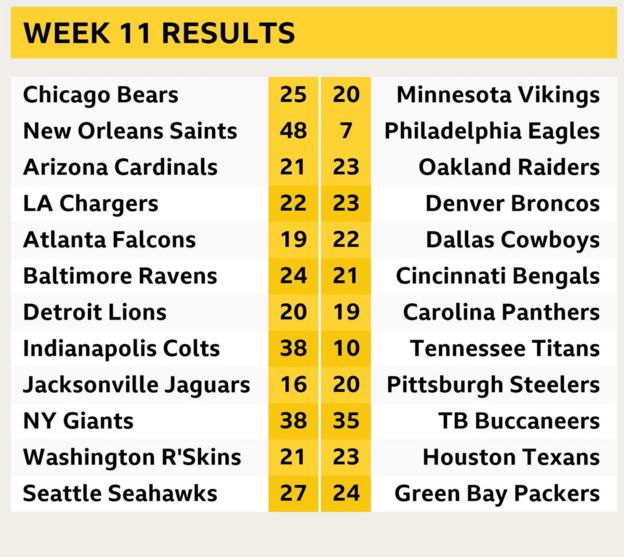 What happened on Monday night?

The season's biggest game so far saw the Los Angeles Rams win a clash of two Super Bowl favourites as they beat the Kansas City Chiefs 54-51 in the third-highest scoring NFL match of all time.

It is the first time two teams have scored more than 50 points in a match.

"It was a whirlwind," said Rams head coach Sean McVay, whose side improved to 10-1. "Until the final few seconds you weren't really able to breathe."

Plays of the week

Gruden and Carr go at it on the sidelines

There should be a close relationship between a quarterback and his head coach, but every so often temperatures flare on the sidelines - as Derek Carr and John Gruden showed during the Oakland Raiders game.

Gruden has struggled since returning to the NFL from the broadcast booth on his whopping $100m deal, failing to get the best out of the talented but underperforming Carr at quarterback.

The angry exchange of words may have actually helped in this case, though, as Oakland actually managed to win the game against Arizona.

Bears only sing when they're winning

The Chicago Bears haven't had much love this season despite being a surprise success, which they took a step further when beating the Minnesota Vikings to stretch their lead at the top of the NFC North.

Since the NFL relaxed the rules on touchdown celebrations, the players have been getting ever more creative by the week, and Eddie Jackson pulled out all the stops with his number.

Heads-up play of the week

New York Giants linebacker Alec Ogletree showed remarkable hands to scoop the ball out of the grasp of his own team-mate before scoring an interception return touchdown.

Janoris Jenkins initially got his hands on the ball against the Tampa Bay Buccaneers but, as he rolled around trying to control it, Ogletree came flying in and picked it up out of his grasp.

He then turned a pick into a pick six by rumbling into the end zone to complete one of the plays of the week.