The New Orleans Saints continued their run as the most in-form team in the NFL and quarterback Drew Brees reached another milestone as they enjoyed a dominant 51-14 victory at the Cincinnati Bengals.

Brees moved on to 509 career touchdown passes to move above Brett Favre and sit behind only Peyton Manning on 539 in the all-time list.

And the Saints proved the are genuine Super Bowl contenders by following up last week's win over the previously unbeaten LA Rams.

It was the joint-worst defeat in Bengals history and the second-most points they ever conceded as they became the first team in the Super Bowl era to allow 500 yards in three straight games.

With running backs Mark Ingram and Alvin Kamara, wide receiver Michael Thomas and even Brees himself scoring in the six-touchdown romp, New Orleans moved on to 8-1 for the season to match the Rams and Kansas City Chiefs as the only NFL teams with just one loss.

"We just found our swag, we found our stride," said Kamara after the win. "This team is persistent, consistent, we take advantage of opportunity.

"We execute and we make sure we handle our business, from top to bottom, no matter who's in. Everybody knows their role and plays their role. Nobody's trying to one-up each other."

The Saints have another big game next week as they welcome Super Bowl champions Philadelphia to New Orleans.

The LA Rams rebounded from last week's tough loss in New Orleans and a traumatic week closer to home with a battling 36-31 victory over divisional rivals Seattle Seahawks.

Wildfires in California forced the Rams to miss midweek practice and forced several players to evacuate their homes, while the Thousand Oaks shooting close to their training base made for a sombre mood at the game.

On the field, the Rams offered some kind of relief for a troubled region as Todd Gurley continued his remarkable season with another 120 yards and a touchdown as the hosts just about held off a stout effort from the Seahawks.

Commentators are running out of superlatives for Kansas City Chiefs quarterback Patrick Mahomes as he threw his 31st touchdown pass of the season to set a new team record - with six games remaining. The Chiefs are still the best team in the AFC.

The New England Patriots suffered a third heavy defeat on the road this season with a shock 34-10 upset at the Tennessee Titans, where even Tom Brady catching a pass wasn't enough to the Pats to get into the game.

The Titans have now won back-to-back games and are suddenly well in the AFC play-off race after the Miami Dolphins suffered a comprehensive 31-12 against the Green Bay Packers.

The Los Angeles Chargers have quietly won six games on the spin to sit on 7-2 after a comfortable 20-6 victory against the Oakland Raiders - with their major problem being they are in the AFC West alongside the Chiefs.

In the NFC, the Chicago Bears top the NFC North after a 34-22 win over divisional rivals Detroit Lions, thanks to Mitchell Trubisky throwing three touchdowns and a career-best 355 yards. The Bears had lost the last ten divisional games.

The Cleveland Browns won their third game of the season and dented the slim play-off hopes of the Atlanta Falcons as quarterback Baker Mayfield and fellow rookie Nick Chubb starred in a 28-16 success.

Mayfield outplayed opposite number Matt Ryan to continue to suggest he was worth being taken as the first pick in the draft by the Browns, while Chubb produced the longest run in team history with a blistering 92-yard score.

The season looks over for the Jacksonville Jaguars after they lost to the improving Indianapolis Colts while Ezekiel Elliott starred for the Dallas Cowboys as they upset reigning champions Philadelphia Eagles as they suffered a third straight home defeat. 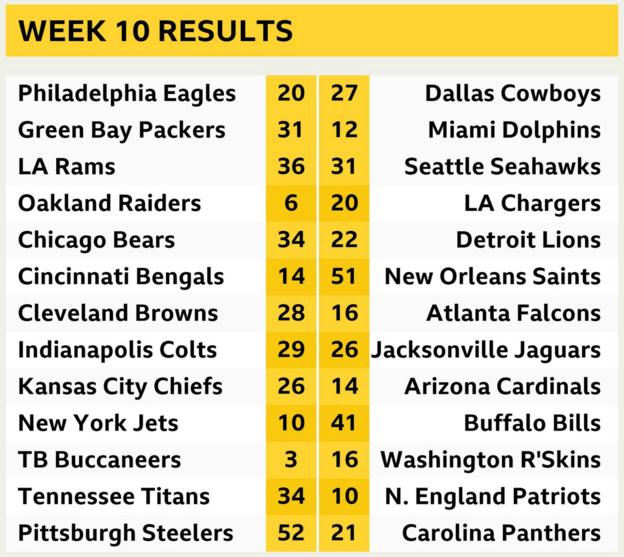 This has been a celebrated fixture down the years between two huge teams in the NFL, but they're both challenging for the first pick of the draft after woeful seasons so far have seen them manage just three wins between them.

Quarterback problems are at the route of both teams' problems, with two-time Super Bowl winner Eli Manning coming under huge pressure in New York for his performances so far this season.

San Francisco's season fell apart when start QB Jimmy Garoppolo was lost for the season with injury, but in Nick Mullens walked off the practice squad to have one of the best NFL debuts ever last week and will be given the chance to prove himself again this week.

Plays of the week

LA Rams running back Todd Gurley is the fourth player in history to score a touchdown in each of his first ten games of the season.

Tom Brady's catch on a trick play may not have worked, but it saw him join Jerry Rice as the only players to catch a pass in the NFL aged 41.

The Patriots suffered their third double-digit loss on the road this season - the most such defeats in a season since 2008, when Tom Brady only played one.

An unwanted record came the way of the Tampa Bay Buccaneers as they became the first team in NFL history to gain over 450 yards of offence yet score just three points or less.

The New Orleans Saints have scored 96 points in their last two games - that is the most in any two games in team history.

Nick Chubb's 92-yard rushing touchdown was the longest run in team history, and the longest offensive play in 14 years.

Tyreek Hill goes behind the lens

Chiefs receiver Tyreek Hill produced the celebration of the season as he jumped up behind the TV camera to film his team celebrating his touchdown against the Arizona Cardinals.

It was a record touchdown for quarterback Patrick Mahomes and Hill wanted to do something special to mark the occasion - even if he got a penalty flag and telling off from his coach Andy Reid for his troubles.

Big offensive lineman don't often find themselves catching touchdown passes, but everything was going right for the Buffalo Bills on Sunday so why not roll the dice?

Dion Dawkins showed good hands for a big man as he hauled in a score for the Bills against the Jets - which put him into a tie for second on the team in reception touchdowns this season!

"It was, 'Get Dion in the end zone, on one'. That was it. And that's what happened," Dawkins said. "We just had to get in the right position to execute the play."

Being a top sportsman often gets you prime seats for the big games - but Floyd Mayweather got more than he bargained for from his front-row seat at the LA Rams game against the Seattle Seahawks.

The unbeaten boxer was in the right place at the right time to be handed not one but two footballs after both teams had scored touchdowns at the Coliseum.

The Rams' Brandin Cooks and Seahawks' Tyler Lockett both picked out Mayweather to receive the much sort-after souvenir - proving you do get what you pay for. 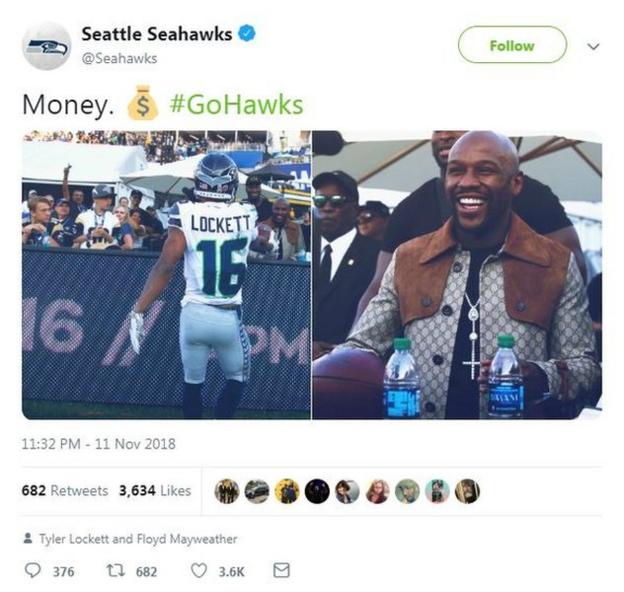