Let's start with the big talking point of the weekend - the return of Tom Brady from suspension.

The future Hall of Fame quarterback took over a 3-1 New England Patriots team and, as expected, put up very pointed numbers against a weak Cleveland Browns outfit. Angry at the league for the length of his Deflate-gate suspension, Brady did his talking on the pitch, throwing for 406 yards and three touchdowns.

However in his mind, his indignation will not be tempered until he has a handful of Super Bowl rings.

Having a fit Rob Gronkowski is another bonus, and his fellow tight-end Martellus Bennett is having a career year. The Pats feel slighted and they will continue to play with chips on both shoulders.

How bout them Cowboys?! They are 4-1 and the rookie combo of quarterback Dak Prescott and running back Ezekiel Elliott have Dallas fans excited about a rebirth of the glory years of Aikman, Irvin and Smith.

But wait - Prescott, the rookie fourth-round pick, is just holding the job until incumbent Tony Romo gets healthy. I'm going to get controversial here. Every expert I've read says Romo can do X and Y and Prescott is still learning and is the quarterback of the future. What? This kid is showing poise, maturity, awareness and no shortage of skill. Give him the job.

Let Prescott and Elliott grow together and get a real buzz back about Cowboy football. Romo is 36, has a bad recent injury history and surely can't go on for much longer. Dallas, the future is now. Oh and by the way, he still hasn't thrown an interception in his first 155 pass attempts in his career. That's second all-time. Know who's first with 162? Tom Brady.

I said last week that for the Oakland Raiders to be taken seriously they have to beat a divisional rival like San Diego at home. They did and they are serious, now at 4-1 and tying the Broncos at the top of the AFC West. Serious, and really fun to watch.

It should be Kaepernick time in San Francisco 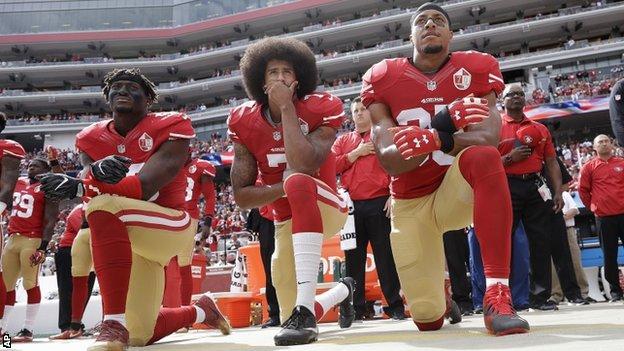 The San Francisco 49ers have to turn to Colin Kaepernick now. They are a side devoid of offensive weapons, save Carlos Hyde, but opposition defensive co-ordinators can plan for him knowing they have little passing game.

Blaine Gabbert is a very able back-up quarterback, but nothing more. Kaepernick has had his contract restructured, got benched last season for terrible plays, looks painfully thin and has made the headlines (even the cover of Time magazine) for his stand about racial inequality. But I'd like to know this. Can he still play?

Can he produce a spark for a proud franchise that, at 1-4 for the season, are dire. Supporters now half fill the beautiful new Levi stadium and have nothing to look forward to until the draft. Even if it goes badly for him and the 49ers, what have either got to lose?

Marcus Mariota: The Titans quarterback only threw for 163 yards but rushed seven times for 60 yards. Efficient and slowly finding his way.

Mike Carlson: The BBC expert revealed on 5 live NFL on Sunday that he eats gingerbread men from the head down. And I thought my opinion of him couldn't get higher.

Miami & Ryan Tannehill: Again. Now 1-4 and then gets the head coaches backing in the news conference that he's the 100% starter for the season.

Marc Trestman: Fired as the Baltimore offensive coordinator. Not surprising as the Ravens could only score 10 against Washington. He continued to call passes when running back Terence West had 11 carries for 95 yards.

Cincinnati Bengals: Now 2-4 after losing in Dallas, this talented roster has to now go to New England next week. Expected playoff hopes are fading.

Laramy Tunsil: Back to the Miami Dolphins. The first year guard was inactive last week with an ankle injury. Not a playing or training injury. No, he slipped in the shower.

You can listen to the 5 Live NFL show on BBC Radio 5 live sports extra every Sunday.