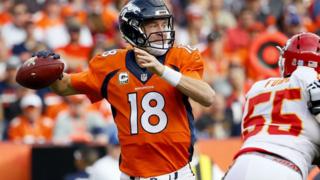 Manning found Ronnie Hillman in the first quarter against the Kansas City Chiefs to increase his career passing yards total to 71,840.

That exceeds the previous best of 71,838 by former Green Bay Packer Brett Favre, who congratulated Manning.

Although he broke Favre's record, the ex-Indianapolis Colt player did not have the best of days on Sunday.

He was replaced in the third quarter after throwing a fourth interception pass in the 29-13 loss to the Kansas City Chiefs.