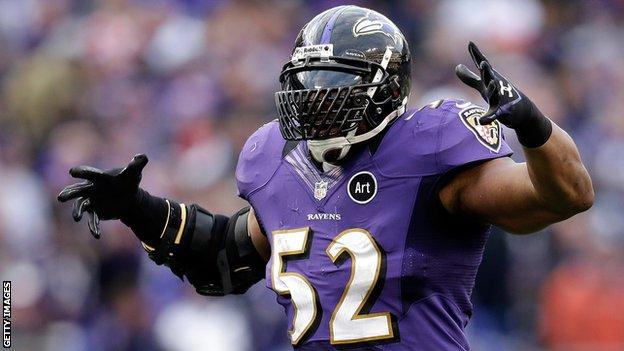 The Baltimore Ravens beat the Indianapolis Colts to extend the long and distinguished career of the man many observers consider to be the greatest defensive player in the history of the sport.

Linebacker Ray Lewis, 37, recently announced that he would retire at the end of the season and his team-mates were determined not to let him down in his final home appearance.

While the Ravens' defence did well to stop the Colts' rookie quarterback Andrew Luck - who has more than lived up to the pressures associated with being the number one draft pick - it was his opposite number Joe Flacco who emerged victorious.

That Flacco did was largely down to a spectacular performance from his main target, Anquan Boldin. The wide receiver broke the team's record with five catches for 145 yards, including an 18-yard touchdown reception in the fourth quarter which sealed a 24-9 victory for the Ravens.

Baltimore will next travel to Denver to face the AFC's top-seeded Broncos, who had earned the right to a bye through the wild card weekend.

Next weekend's other AFC divisional round game brings together the Houston Texans and the New England Patriots.

Thanks to some stifling defence, the Texans were never really in danger at home to the Cincinnati Bengals.

While they struggled to convert possession into points, Arian Foster ran for 140 yards and a touchdown as they ran out 19-13 winners.

It was sweet revenge for the Packers, whose 37-34 loss in the final week of the regular season to the Vikings deprived the former of a bye week and guaranteed the latter a place in the play-offs.

Green Bay quarterback Aaron Rodgers kept the visitors' defence on their toes throughout, finding 10 different receivers as he completed 23 of 33 passes for 274 yards and one passing touchdown.

Meanwhile Peterson, who last week fell just short of breaking Eric Dickerson's 1984 record for the most rushing yards in a season, was limited to 99 yards from his 22 carries.

The Packers will head west to face the San Francisco 49ers on Saturday, 12 January for a place in the NFC Championship game, which will also feature the winner of Sunday's match-up between the Seattle Seahawks and the top-seeded Atlanta Falcons.

In a match hyped as being a duel between rookie quarterbacks, Seattle's Russell Wilson came out on top against the Washington Redskins' Robert Griffin III.

But that tells only half the story, as an already injured Griffin - widely known as RG3 - was eventually forced out of the game in the fourth quarter with a knee injury.

The Seahawks had earlier responded well to a nightmare first quarter in which Griffin threw a pair of touchdown passes to Logan Paulsen and Evan Royster.

But from 14-0 down, the visitors never looked back, scoring 24 unanswered points thanks to some solid defence and inspired play by Wilson and running-back Marshawn Lynch.

Lynch ran for a touchdown and 132 yards from his 20 carries, while Wilson completed 15 passes for 187 yards and a touchdown.

His performance was typified in the fourth quarter when, having handed the ball off to Lynch, he charged downfield before throwing a brilliant block to allow his team-mate to score.

That gave the Seahawks the lead for the first time and, less than a minute later, the game was all but over when Griffin's knee buckled as he tried to field a bad shotgun snap, the pain so bad that he did not even try to recover the ball.