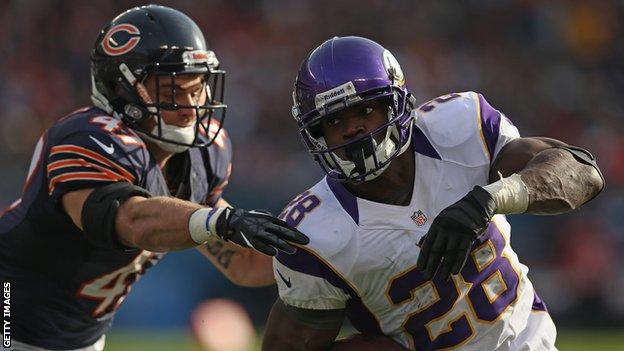 Minnesota Vikings running back Adrian Peterson is on the verge of breaking one of the NFL's most durable records.

He needs 294 yards from two remaining games to surpass the 2,105 single-season mark achieved by Eric Dickerson for the then Los Angeles Rams in 1984.

Peterson, 27, suffered a potentially career-ending knee injury a year ago but has returned to the type of form that led to him being voted to the Pro Bowl in each of his first four seasons.

Today's NFL is dominated by the passing game, which makes the fact that Peterson is challenging Dickerson's 28-year-old record even more remarkable.

Since joining the Vikings as the seventh overall pick in the 2007 draft, he has surpassed the 1,000-yard benchmark in each of his first four campaigns. He was only denied a fifth last season when he suffered a severe knee ligaments injury.

Peterson's first target will be to pick up 188 yards from the Vikings' two remaining regular season games to become only the seventh player ever to have run for 2,000 yards in a single season.