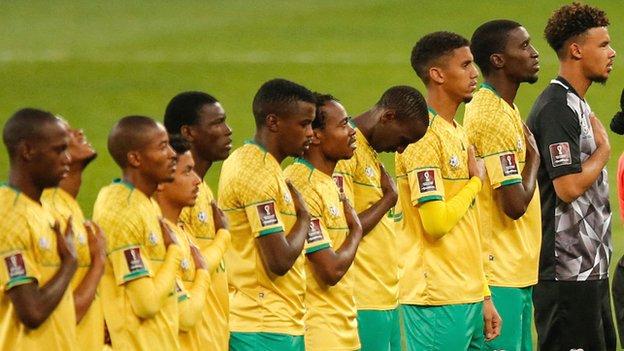 "Robbed" South Africa are set to make a "formal complaint" about "questionable decisions" made by the match officials in Sunday's 1-0 defeat by Ghana, says their football association chief.

Bafana Bafana needed a draw to reach the third and final round of African qualifying for the 2022 World Cup, but Ghana won with a controversial penalty.

"The match officials have decided the game, which is not what is supposed to happen," claimed South Africa Football Association's (Safa) chief executive Tebogo Mothlante.

"We will be writing to both Caf [the Confederation of African Football] and [world governing body] Fifa - firstly to investigate how the game was handled and secondly to challenge some of these decisions.

"We have already registered with the match commissioner that we will be making a formal complaint."

The Black Stars' narrow win enabled them to reach the African World Cup play-offs by the narrowest of margins, ousting South Africa at the top of the group on goals scored.

The penalty was awarded after Ghana's Leicester City midfielder Daniel Amartey went down following what appeared minimal contact from defender Rushine de Reuck, who was booked for his challenge.

Mothlante explained that Safa has concerns over the legitimacy of both the decision and the display of the officiating team from Senegal, headed up by referee Maguette Ndiaye.

"We are very disheartened by their actions and we can't let it destroy the players - when we have the chance to challenge, we will challenge," he added.

"We feel very much robbed because it is not an isolated incident of a penalty. There are just a lot of questionable decisions by match officials and we will get an expert to dissect other incidents, so we can make a strong case."

South Africa is well aware that the capacity for matches to be replayed does exist. They were forced to replay a 2018 World Cup qualifier against Senegal after the referee was found guilty of match manipulation.

This included the award of a penalty to Bafana Bafana when Senegal's Kalidou Koulibaly was adjudged to have handled the ball, despite replays showing it had hit his knee.

Fifa took the unusual step of ordering the game to be replayed. South Africa lost 2-0 as Senegal qualified for the World Cup in Russia.

"Of course we are looking at the precedent whereby Fifa ordered us to replay Senegal and we think that if justice needs to be served the same decision should be taken against this Ghana game," added Mothlante.