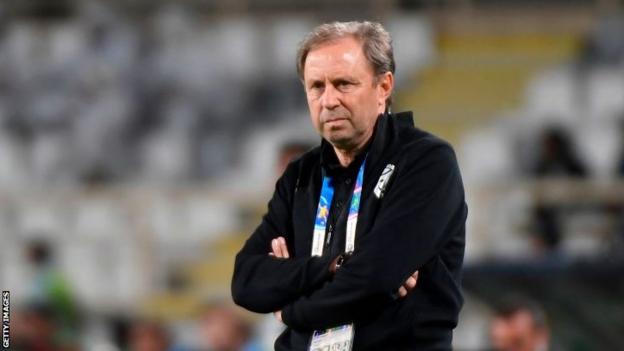 Milovan Rajevac, who led Ghana to the 2010 World Cup quarter-finals, has been re-appointed as coach of the Black Stars.

The 67-year-old replaces CK Akonnor, whose contract was terminated by the Ghana FA (GFA) earlier this month, after the 1-0 loss to South Africa in a 2022 World Cup qualifier.

Rajevac has signed an initial one-year deal, which will be automatically extended until February 2023 if he can lead Ghana to next year's World Cup.

The Serb's first priority will be to prepare for October's back-to-back World Cup qualifiers against Zimbabwe.

Ghana are currently third in Group G, on three points after two rounds of six, with only the group winners advancing to the next round in the race to reach Qatar.

He will be assisted by former Ghana international Otto Addo, who will be combining the Black Stars' role with his job as a coach at German Bundesliga club Borussia Dortmund.

Another man returning to work with the national team is Maxwell Konadu, who served as an assistant to Kwasi Appiah and then Avram Grant between 2014 to 2019.

Former international Richard Kingson has been appointed as goalkeeper coach.

Rajevac's first stint in charge of Ghana began in August 2008 and came to an end after the 2010 World Cup as he decided not to renew his contract despite taking the Black Stars to the last eight in South Africa.

Before the World Cup run, he had led Ghana to the 2010 Nations Cup final Angola, where they lost a tense final 1-0 to Egypt.

He has since coached Qatar, where he lasted six months, followed by a very brief stint at the helm of Algeria which ended when he resigned after just two matches in charge.

He was most recently in charge of Thailand but was sacked in January 2019, the day after a 4-1 lost to India at the Asia Cup.