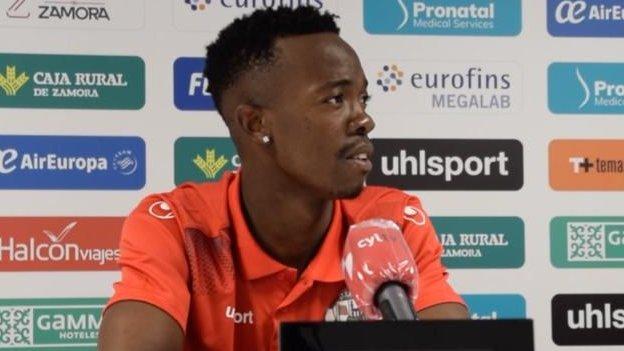 Zimbabwe under-23 international Martin Mapisa says he wants to follow in the footsteps of some of Africa's best goalkeepers.

Like many of those who have made it to the top the 22-year-old, who earned his first senior cap in the recent Africa Cup of Nations qualifiers, has started his journey in Spain.

A product of the Harare-based Aces Youth Soccer Academy Mapisa began his Spanish odyssey in 2018 at seventh-tier club CD Almunecar since then he has moved up four divisions and now plays for Segunda B side Zamora FC.

"My ultimate goal is to be one of the best goalkeepers in the world. And play in one of the top leagues," he told BBC Sport Africa.

The history of African keepers includes two other Cameroon greats; Jacques Songo'o who had two spells at Deportivo La Coruna, while Thomas N'kono played more than 200 games for Espanyol.

"When I came here it was all new, the facilities and everything," he remembers.

"I was playing with people who do not speak my language but I learnt so fast because as a goalkeeper you have to communicate and now I can speak Spanish."

The 2010 World Cup in South Africa provided Mapisa with one of his inspirations in Germany and Bayern Munich goalkeeper Manuel Neuer.

"I started looking up to him at the 2010 World Cup. I looked at his videos and I could see how good he was," Mapisa explained.

Mapisa recently took the next step on his journey to fulfilling his dreams by making his senior international debut in a 2-0 loss to Zambia in the recent Nations Cup qualifying after being on the bench for the win over Botswana four days earlier.

Despite that loss to Chipolopolo the Warriors secured a place at next year's Nations Cup in Cameroon thanks to the win over the Zebras and Mapisa will now hope that he can continue to impress in Spain and earn a place in Zimbabwe's squad for those finals.