Not only is Temba Bavuma the first permanent black African captain of a South African international cricket team but he has three World Cups to prepare for.

The 30-year-old is set to lead the Proteas in limited-overs cricket which includes the next two Twenty20 World Cups, later this year and in 2022, and the next 50-over World Cup in 2023.

As he plans for those tournaments Bavuma admits that the person inspiring him the most is England's limited-overs captain Eoin Morgan, who led his side to the 50-over World Cup title in 2019.

"Eoin Morgan has revolutionised the whole white-ball game for England and he's seen them become a powerhouse and he's an inspiration for me," Bavuma explained.

"If I look at the South African team and where we are now I don't think it's lost on anybody in the country that our performances haven't been to a standard that is expected.

"So it's on me to boost that confidence within the team because I believe the team does have the necessary skill-set to be able to be competitive and challenge the likes of England all the way at the top.

"That will develop the more and more we come together as our team, and the more the management stamp their authority.

"Personally I'm looking to improve my position, as it stands now I don't believe that I possess the answers to it all… but it's a journey that I'm willing to go on for the benefit of the team."

But Bavuma says that he is not thinking as far ahead as the World Cup just yet as he has more urgent things to concentrate on.

"It's a scary and daunting prospect. In saying that it's super exciting," he continued.

"I've not thought too much about the World Cups just yet but now we need to get the ball rolling in the upcoming series against Pakistan [at the start of April]." 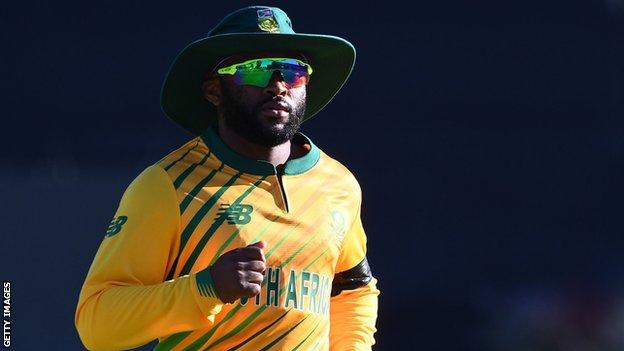 As well as the captaincy role Bavuma will further be under the spotlight as being the first permanent black African captain of a South African international cricket team.

Mixed-race players Ashwell Prince, JP Duminy and Justin Ontong have previously captained a South Africa cricket side on a temporary basis. Hashim Amla, the first Asian to play for South Africa, has also captained his country in matches in all three formats.

Prince was the first mixed-race player to captain South Africa when he led them for two Tests in Sri Lanka in 2006, while Graeme Smith was injured.

Bavuma became the first black African to score a Test century for South Africa, against England in Cape Town in 2016.

"I understand it. It's a big responsibility," he says.

"It came as a surprise, at a point in my career when my mind wasn't thinking about it [the captaincy]," he told the BBC World Service's Newsday programme.

"It was a no-brainer to be honest and I don't think any aspiring cricketer would turn it down. And I guess my immediate thought was 'here is an opportunity to create a legacy'.

"I just took it as another chapter in my journey. It's a journey that's had it's ups and had it's downs, but I've enjoyed navigating along the road."

Bavuma is aware that in some ways he has some big footsteps to follow in with Siya Kolisi, the first black captain of South Africa's Rugby Union side led his team to World Cup glory in Japan in 2019.

"Just simply as a cricketer we know that it's the one thing South Africa has been missing [a black captain], it's something that comes up a lot in conversation amongst the team," he explains with a smile on his face.

"I have that opportunity as captain to lead the team to something like that [emulating Kolisi]."