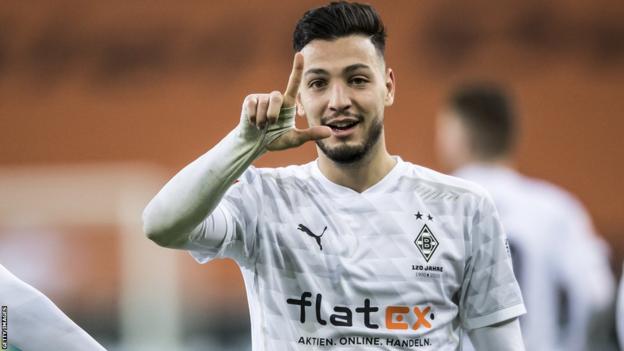 In 2019 the pair played alongside each other to help the Desert Foxes win the Africa Cup of Nations title in Egypt.

"I've really wanted to play against him. Now let’s wait for the game and see if he can nutmeg me!" Bensebaini told BBC Sport Africa.

"We trained together, we played an Afcon together, so I have a rough idea of his playing style. That being said, he is still Riyad, he is still a great player and it’s my problem to find the solutions to stop him.

"It’s hard to say that I know him because he is outstanding from a technical point. It is not easy to read what he is about to do with the ball."

Bensebaini and 'Gladbach, who lost to Liverpool in the 1977 European Cup final, will take a lot of confidence after progressing from a tough group.

The German side finished second in Group B behind Spain's 13-time European champions Real Madrid but ahead of Ukraine's Shakhtar Donetsk and Italian giants Inter Milan.

"To manage to lead the way until the last game, in a group with Real, Inter and Shakhtar, wasn’t an easy task. We are proud of what we have done and this qualification," Bensebaini added.

In those group games the 25-year-old left back weighed in with two goals for his side, who finished with 16 goals from their 6 matches - that is level with Barcelona and only behind their German rivals Bayern Munich.

Wednesday's game is being played in Hungary due to Covid-19 restrictions on people travelling between the UK and Germany.