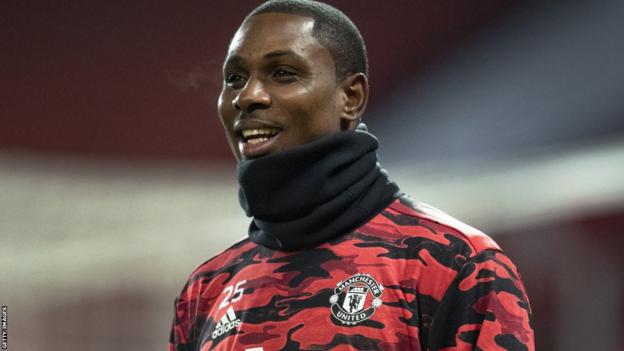 Odion Ighalo's representatives are exploring many options for the Manchester United striker this transfer window with the Nigerian attracting interest from clubs in the Premier League, Europe and Middle East.

The 31-year-old's loan spell at Old Trafford from Chinese side Shanghai Shenhua expires at the end of this month and he has not ruled out a move to Major League Soccer (MLS) in the United States.

But his representatives, who have held talks with clubs in England and Europe, have quickly tried to cool talk of him being linked with a move stateside, insisting MLS is just one of many options.

"I can confirm that some Premier League clubs, two teams outside of England and some clubs in the Middle East have made formal enquiries," one of his representatives told BBC Sport Africa.

"Of course, he said [in an interview] that the MLS could be interesting, but that is just an option outside of the strong interest received so far.

"For now he's still a Man United player on loan from China where he still has a contract. He could stay in England where his family is based or try something new because he has many options to mull over."

The former Watford and Granada striker has scored five goals in 23 appearances since arriving at Old Trafford on Deadline Day in January 2020, but made just four appearances for the Red Devils this season.

Despite enjoying praises from Ole Gunnar Solskjaer during the first chapter of his loan spell, his quest for more opportunities diminished following the arrival of Edinson Cavani in October.

His deal at Shanghai Shenhua ends on 31 December and his parent club expect him to return at the end of his loan in Manchester ahead of the 2021 Chinese Super League.

"There's a slight sense of disappointment about the current season, but Ighalo remains grateful for the opportunity to have played for one of the biggest clubs in the world.

"He wanted to end his time at United on a high by playing more for his boyhood club but he is grateful to the manager and proud of himself."

A lifelong United fan, Ighalo scored 16 goals in 35 appearances for Nigeria before calling time on his international career in July 2019.

He produced seven goals to finish top scorer in the 2019 Nations Cup qualifying and his five goals and one assist helped Nigeria finish third at the tournament in Egypt.