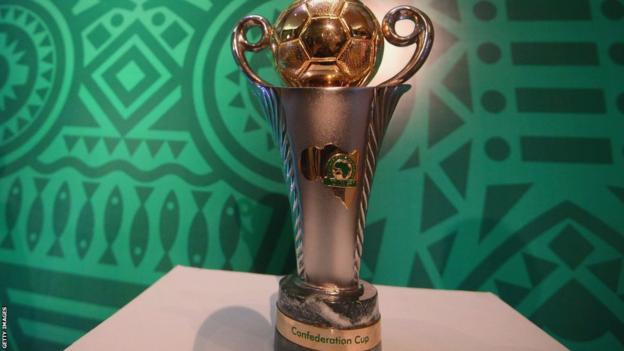 Tunisia, Morocco and Algeria all have two clubs who won through to the play-offs for the Confederation Cup.

The six sides will be in Friday's draw that sees the 16 winners from the Confederation Cup face the losers from the African Champions League for a place in the tournament's group stage.

There is still one tie to be decided after the second leg of Rivers United and South Africa's Bloemfontein Celtic did not go ahead on Wednesday in Nigeria as planned.

The Nigerian club hold a 2-0 lead from the first leg of the tie in South Africa.

"Celtic didn't travel to Nigeria after the Nigerian authorities insisted that the Bloemfontein-based club would not be given preferential treatment with regards to their strict Covid-19 protocols," Safa added in its statement.

"The procedures require all individuals visiting Nigeria from high risk areas to be quarantined for 7 days upon arrival in the country. South Africa is designated as one of the high-risk countries whose visitors are required to undergo this process."

"Celtic through Safa had written to both the Nigerian FA and government requesting for this requirement to be waivered. However, the Nigerian government turned down this request, forcing Safa to write to Caf for further guidance."

Three in the draw

Among those who did win through are holders Renaissance Berkane, who are joined by Tihad Casablanca along with Champions League losers Raja Casablanca in Friday's draw to make it three Moroccan clubs in the play-offs.

Tunisia will also have three sides in the draw with Etoile du Sahel and US Monastir winning through from the Confederation Cup and CS Sfaxien dropping down from the Champions League.

Algeria's Entente Setif made it through to the play-offs without kicking a ball in the last 32 while JS Kabylie progressed with a 4-1 aggregate win over Niger's US Gendarmerie Nationale.

Setif advanced after a wasted journey to Chad to play Renaissance in the first leg of their tie after the match was called off at the lost minute when the teams and match officials were denied access to the stadium that was due to host the match.

No official reason has been given for the locked stadium but it resulted in Renaissance being disqualified from the tournament.

Orlando Pirates had an easier than expected tie against Esperanca Sagrada after the Angolan side withdrew at the last minute ahead of their second leg in South Africa.

Former African champions Pirates had won the first leg 1-0 and a statement from the Caf did not give a reason behind Sagrada's withdrawal.

Uganda's KCCA narrowly missed out on advancing despite Rwanda's AS Kigali being awarded a 2-0 win for the first leg of the tie, which should have been played on 23 December.

AS Kigali were given the win after the Ugandan club were unable to name a squad of 15 players for the match after several of its squad tested positive for Covid-19.

KCCA managed to win the second leg 3-1 in Uganda but that was not enough as Kigali progressed on the away goals rule.