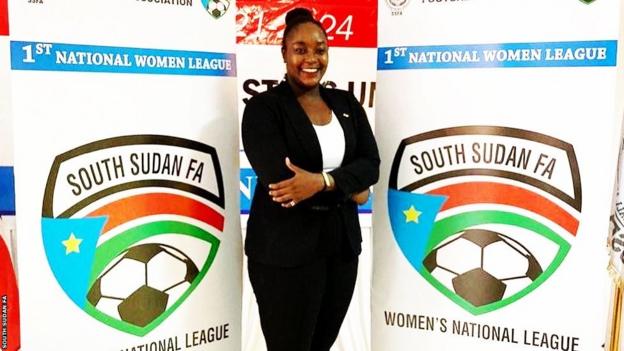 There are still areas in South Sudan where it is still taboo for women to play football and more traditional for girls to be married off at a very young age.

This is just one of the hurdles South Sudan Football Association (SSFA) is facing as it embarks on a journey to transform women football in the country.

Despite the challenges the SSFA has taken the first steps by appointing former Uganda international Jean Sseninde to a consultancy role to spearhead its four-year women's football strategy - Stars Unite.

"Some of the barriers include convincing members that women can still play football," Sseninde told BBC Sport Africa.

"We have a lot of work to do in terms of sensitising all the way in the communities and schools so that everyone in South Sudan will know that it's time for women's football to shine.

"We need to have all stakeholders support women which will also help stop early marriages of young girls."

South Sudan became the 209th member of football's world governing body, in 2012 and since then the men's team has taken part in World Cup and Africa Cup of Nations qualifiers.

But it was not until last year that its women's national team played the first international game in 2019 during the regional Cecafa Women's Football Championship.

They also managed to record a 5-0 win over Zanzibar, between a 9-0 loss to Tanzania and a 3-0 defeat to Burundi.

"We need to develop women's football in a scientific way and the correct way," SSFA President Francis Amin explained.

"In the next four years actually, we need to be part to be the leading women's team in our region Cecafa and also at a better level in Caf and Fifa."

Sseninde, who hold a Uefa B Licence, is confident that the strategy put in place can be successful and also bring to girls and women around the whole country.

"The girls are actually very talented. I was beyond impressed when I saw them play," she insisted.

"I tell you there's a lot of hope for this team to be the best in East Africa, give it just a few years.

"I know once the teams' facilitation is improved and they get full time training, it's going to be the team to watch in 4 years."

The players are also looking forward to developing the women's game in South Sudan.

"This will bridge the gap between men and women football because for the longest time football has been male dominated sport," said Amy Lasu Luate, the captain of South Sudan national team.

"I think now people are aware, people have opened their eyes. It is a good initiative for us to showcase our talent all over the continent." 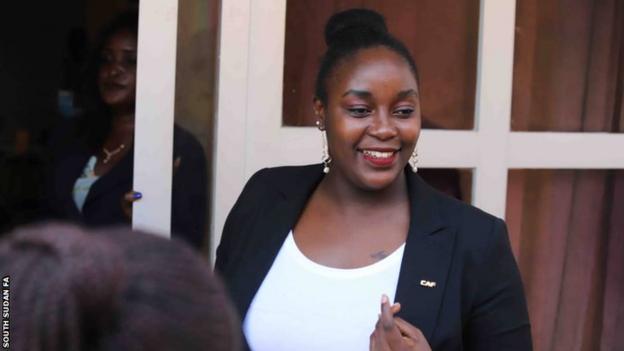 Sseninde is currently at Wakefield Trinity Ladies, a lower-tier club in England in the North East Regional Women's Football League and is also on the Confederation of African Football's women's committee.

"For me as a consultant my first task is to work together with the amazing team in South Sudan so that we implement our plans in the strategy according to our implementation plan." the former Charlton Athletic, London Phoenix, Crystal Palace and QPR player added.

The immediate target is to have some coaching courses for the women as they get ready for the first ever women's league.

"Then through sensitization, advocacy and branding we build the women's football product to hopefully generate it's own funds in future," Sseninde continued.

"We have to pay attention to small details, be transparent, communicate constantly and get everyone included in our strategy."

The SSFA wants the national women's league to kick off in February but its president admits there are still barriers to overcome.

"The situation of South Sudan is difficult because of its, we have a problem of transportation - getting the teams from one state to the other states and to places where there are competitions.," Amin admitted.

"Finances are also an issue as our budget is limited but we are trying to squeeze ourselves to make sure this happens."