Not only is he set to become the first player from Ivory Coast to play in the Brazilian top flight but Salomon Kalou has also been recruited by Botafogo to help them both on and off the pitch.

Kalou left his previous club Hertha Berlin in acrimonious fashion over a suspension before joining Botafogo, who previously had been looking to sign both Yaya Toure and John Obi Mikel.

"Botafogo needs a striker with an international reputation, an experienced striker who can score goals," Tulio Maravilha, who won the Brazilian championship with Botafogo in 1995, told BBC Sport Africa.

"Since my time at Botafogo, the club hasn't had a striker who is a global reference. In midfield, Honda can release Kalou's speed with his passes."

Alongside Honda, the 35-year-old Kalou will be expected to bring some experience to the Botafogo set-up and mentor promising players like Luiz Henrique and Pedro Raul.

It is a role Clarence Seedorf fulfilled when he arrived in 2012 at Botafogo as he ended his playing career.

The Dutch midfielder quickly became a natural leader en route to winning the 2013 state championship, a regional competition that precedes the national league.

A club in debt

Another thing Botafogo will hope that Kalou can help with is attracting money to the club, whose massive financial debts have curbed development in recent years.

The club owes nearly $150 million, making Botafogo the most indebted club in Brazil, a predicament compounded by the coronavirus shutdown.

The club is struggling to pay salaries and last season electricity and water at the headquarters and stadium were cut off.

So Kalou will also serve as an ambassador for Botafogo and again follow in the footsteps of Seedorf.

With his star power and a career spent at Feyenoord, Chelsea and Lille, Kalou can bring more visibility and exposure to Botafogo.

"My feeling is that with Kalou, Botafogo are going all in, like in poker," explained Carlos Mansur, a football journalist at O Globo newspaper to BBC Sport Africa. 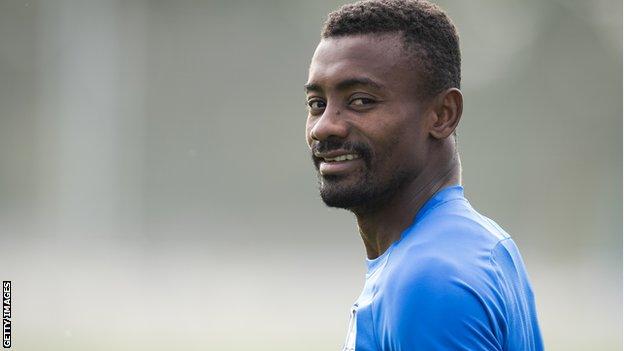 "It is betting on a player with name, trying to attract partners, visibility and get better results, so as to generate the revenue to facilitate a transition to a PLC structure.

"Without the money of a major investment, without a patron, without normal revenue, Botafogo can no longer face up to their debts."

Maravilha agrees that is not just on the pitch that the club need Kalou's assistance.

"Botafogo want their brand to be known," says Maravilha.

"So, you also need a bit of luck with results. The club should at least get a ticket for the qualifiers for next year's Copa Libertadores."

Kalou was immediately being used as a marketing tool at his unveiling with the presenters encouraging the virtual audience to sign up for membership and buy merchandise.

His official presentation was organised at an empty Nilton Santos Stadium, the rows upon rows of vacant seats a consequence of the coronavirus pandemic.

After a few keepy-ups, Kalou name-dropped both Clarence Seedorf and Didier Drogba, reassured the fans of his commitment to his new club and vowed to 'Put Fire', a reference to Botafogo's name which means 'set it on fire'.

The onus, then, is on Kalou, who is expected to debut for Botafogo in the coming weeks.

Last season, the club endured a difficult season to finish 15th and avoid relegation from the top flight.

This time a higher finish in the table will be a success for Kalou and a club that is yearning for better times.