Today's world class players are often praised in the media for their outstanding technical abilities.

Many also hit the headlines for the wrong reasons with shameful diving, horrific tackles and even biting seemingly more common place in today's football.

One man who fits into both categories is Spain and Real Madrid's Sergio Ramos - a World Cup winner who has 26 red cards to his name.

Although that is not the world record which belongs to Colombian Gerardo Bedoya with 45 red cards during a 20-year playing career - which ended in 2015 - with a further two dismissals arriving from the dugout since.

At the opposite end of the scale is Algeria's Abdelhamid Salhi, who enjoyed at 22-year career as a player and a coach and did not ever get a yellow card let alone a red one, for which he received an international award.

The 72-year-old was a one-club player, spending his entire career at Entente Sportive Setif (ESS), and also played internationally for Algeria, he estimates he played more than a 1,000 matches.

He began as a youth player with the club based in the city of Setif in the east of Algeria in 1963 and was with them as a player until 1977.

He explains that respect was the key to his ability to keep calm and avoid being shown and a card.

"One has to respect himself, respect the opponent and respect the referee," he told BBC Sport Africa.

"You will never get into trouble if you put respect first, that's the golden rule for fair play and clean football.

"I have always observed the rules religiously. I have never contested the decision made by the referee or argued with him about anything even when I am victim a bad tackle or another offence."

In fact he recalls with humour how his teammates ended up being booked as they contested and argued with the referee over fouls committed on him by opposition defenders.

"I never contested a decision and as a captain I also prevented my teammates from doing that," he explained.

He admitted that refereeing decisions during his career were often less stringent.

"In our time if a player touched the ball with his hand the referee would give a foul to the opponent team but would not show a yellow card to the offender," he offered as an example.

A fan of VAR

Salhi is a strong supporter of the use of Video Assistant Referee (VAR) technology because it is helping to stop some of the elements of the modern game that he does not like such as the harsher tackles and cheating.

"It (VAR) helps serve justice and establish fairness," he insisted

"How many teams were denied promotion or were relegated because of a goal that was not a goal. VAR is here to stay and that is fantastic for the game."

He also rejected that playing as a number 10 or an attacking midfielder meant he was less likely to commit bookable offences.

"The role of number 10 is not restricted to attacking," he pointed out.

"In my position I had to defend and make tackles to stop a counter-attack or slow it down but I never cheated.

"There are rules which I have never broken in my life. That is what it is all about."

He is one of just two Algerians to have been honoured with the award, which were first handed out in 1965 along with former basketball player, coach, referee and administrator Rene Amrouche.

A one-club player and continental star

Not only was Salhi a gentleman on the pitch he was also a very good player for both club and country.

Born in 1947 in Setif he first began to impress playing for his school, Lycee Kirouani, which soon led to teams trying to recruit him.

Aged just 16 he decided to join ESS, already on of the biggest clubs in Algeria, and was soon representing his nation and playing for the under-19 side.

Among his highlights are beating the youth of former East Germany in 1965 in Oran in a match that was a curtain-raiser to the senior team losing to Pele's Brazil in a friendly.

After just a few games with the ESS youth side he was creating a tremendous impression and showing that he was too good for his age category.

The coaching staff decided to get the necessary medical authorisation needed for a 17-year-old to play adult football.

The ESS coach at the time Mokhtar Aribi caused an immediate stir in the dressing room, ahead of a top-flight match against USMA in Algiers, by handing 'little' Salhi the number 10 shirt for his debut.

"He is only a kid. He is too young for such a role. The coach must be crazy," one of the senior regulars said.

ESS won the game 1-0 with a goal from Messaoud Koussim but the assist went to Salhi, prompting Aribi to say after the final whistle: "The kid is too young... nonsense." 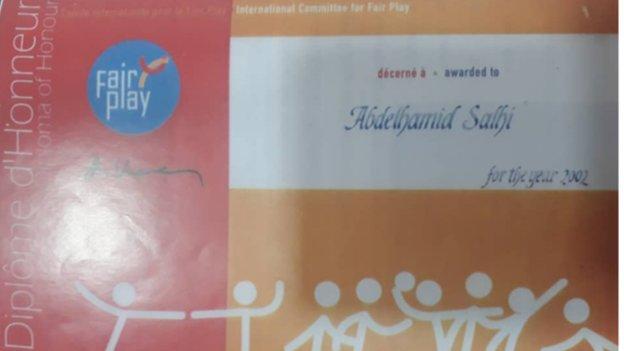 One of the more extraordinary, things about Salhi was that despite not being the tallest player he was exceptionally good in the air.

With the ball at his feet he was blessed with a magical touch that made it hard for defenders to predict his intentions all combined with a dizzying turn of pace and the ability to produce tailored passes.

In 1967 French coach Lucien Leduc took over in charge of the Algerian national team in 1967 and he immediately called up the ESS star, handing him a debut before his 20th birthday against Upper Volta, today's Burkina Faso.

1968 was a bitter-sweet year for Salhi that saw not only the biggest disappointment of his career but also some of the highlights too.

Injury robbed Salhi of the chance of playing at the 1968 Africa Cup of Nations in Ethiopia, just as he was near the top of his game.

That disappointment was tempered by his achievements at club level as he won the league and cup double in 1968, with Salhi scoring the extra-time winner in the cup final against NA Hussein Dey.

His feats that season saw him named as the Algerian Player of the Year.

Salhi's talent and reputation spread across the continent and he was twice picked in 'African' teams to play in friendly events.

In 1972 he was in a squad invited to play in Brazil to celebrate the 150th anniversary of the South American country's independence.

A year later another squad of the continent's best players took part in the Afro-Latin-American games hosted by Mexico.

In that squad he was joined by several compatriots such as Said Ouchen, Miloud Hadefi and Rachid Dali, who grabbed two goals, as well as Shahata once again and Jonas Bahamboula Mbemba of Congo-Brazzaville.

Salhi ended his playing career while he was still competitive because of repeated injuries four decades ago.

He went onto work on the coaching staff of his beloved ESS in various capacities at different times over the years.

Now aged 72 he is still watching the game closely and contributing to the promotion of fair play in football and sports in general.