"I've had a couple of teammates who actually have kids and during half-time they're either having to breastfeed or pump and then get right back on the court," American-Angolan shooting guard Italee Lucas recalls.

"To see that and experience that first hand, it's like wow, it's a different kind of strength."

Being a mother and a top-level basketball player is not easy to juggle. From questions about what pregnancy will do to your body, to fear about your employee's response, bringing new life into the sporting world comes with its own challenges.

At last year's Afrobasket, the highest profile African basketball tournament which was held in Senegal, only 25 of the total 144 players were mothers. That works out at around two mothers on average on a team of 12.

Arguably the highest profile example of a woman playing sport whilst pregnant is Serena Williams. Back in 2017, Williams won her 23rd Grand Slam title at the Australian Open while pregnant with daughter Alexis Olympia Ohanian.

Cameroon shooting guard Baleta Mukoko did not even realise that she was pregnant until later in on her pregnancy. She had been playing for the French under-16 team when a bout of back ache sent her to the doctor, who revealed that she was already seven months in.

"I played basketball that whole year, receiving hits, full contact as usual. As soon as I stopped playing, it was then that my bump came out," she says.

"I had time to give birth, because it was in June and the season started again in August so I had time to recover."

Like Williams, Mukoko was able to return to top tier sport. But one of the key themes around being a mother and an athlete is sacrifice.

She spoke about missing Zyon's first nursery sports day due to training commitments and how difficult that was for her. The dedication and sacrifice needed to be a top athlete is one that Mukoko understands fully.

"My first (child) lives with my mum as my sport takes a lot of my time, and I already don't see him very much."

"I only see him during the holidays and on some weekends. I think that for my next child, I would at least stop my career."

Is a career break necessary? What will that career break do to a sporting career? Will I be financially penalised? Six-time Olympic champion Allyson Felix took on her sponsor Nike after claiming the sportswear giant wanted to pay her 70% less after she became a mother.

It was a fight Felix ended up winning but these are some of the questions that go through the minds of some of the athletes I spoke to at the tournament. And what about having a baby when you physically can't play? That was the case for Ivory Coast captain Mariama Kayoute.

"I had had surgery on both knees, I'd torn ligaments in them. It was after the operation on the first knee that I thought, 'Ok, why not have a child and then continue basketball after?' Now I am very proud to have my child.'' 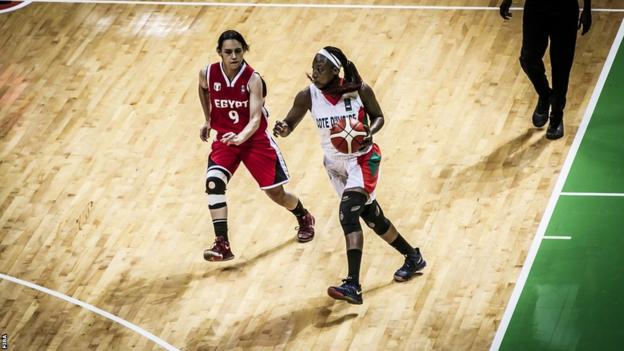 As times and attitudes change, the question of motherhood being an obstacle in a woman's career is something Mukoko's national coach Natosha Cummings-Price doesn't think needs to be a question at all.

"I have seen women play a year at college, have a child, and return back and end up being Conference Champions." Cummings-Price, a coach for a college basketball team in the United States says.

"A woman's choice does not define their athletic career. If you are willing to do the hard work and the commitment to put yourself back in shape because that is the hardest thing for most women who return from a pregnancy, it is to really get the body back into the physical condition that is required to play basketball."

However Cummings-Price adds that "It's their choice if they choose to have a family, and what we encourage them to do is not to give up on their career."

But Cummings stresses that there is one thing that makes all the difference for athletes who have given birth or are looking to start a family while playing.

"It's all about the support that you are receiving from the coaching staff and your administration. As long as the support is there, the sky is the limit for anyone who wants to play basketball."