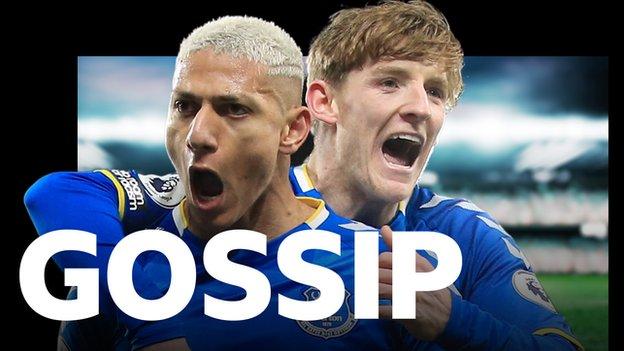 But Everton are not interested in selling Gordon, whose contract with the Goodison Park club runs until 2025, as part of any transfer involving Richarlison. (Liverpool Echo)

Spurs are also firm favourites to land Barcelona and France defender Clement Lenglet, despite interest from Roma in the 27-year-old. (London Evening Standard)

England midfielder Jude Bellingham, 18, will be Real Madrid's main transfer target next summer , although the Spanish club face competition from Chelsea and Liverpool. (AS, via Mail)

Liverpool and Egypt forward Mohamed Salah, 30, is expected to leave at the end of the 2022-23 season as a free agent. Salah has scored 156 goals in 254 appearances since joining the Reds in 2017. (Mirror)

Arsenal have submitted a £35m offer for Ajax defender Lisandro Martinez and appear to be leading Manchester United in the race for the 24-year-old Argentina international. (Mirror)

But Ajax are under no pressure to sell Martinez and value him at £45m. (Sun)

A deal for Antony has been thrown into doubt with Ajax now wanting £70m for the forward. (Mirror)

Newcastle United are set to complete the £32m signing of Lille's Dutch defender Sven Botman, 22, but are ready to move on from their pursuit of Reims' French striker Hugo Ekitike, 20. (Mail)

Frenchman Christophe Galtier, who managed Nice last season, is close to being named the new Paris St-Germain boss, with Mauricio Pochettino on the verge of leaving the club despite winning the league title. (ESPN)

Barcelona will not improve their contract offer to France forward Ousmane Dembele, whose contract with the La Liga side ends on 30 June. The 25-year-old also has offers from Bayern Munich, Chelsea and PSG. (Marca)

Dembele is set to make a decision about his future in the next 72 hours. (Mirror)

Cardiff plan to launch a bid for former Real Madrid winger Gareth Bale next summer after the 32-year-old Welshman opted to sign for Los Angeles FC this week. (Talksport via Sun)

River Plate are waiting for a response from Uruguay forward Luis Suarez, 35, after making a proposal to sign the player when his Atletico Madrid contract expires at the end of the month. (Fabrizio Romano - Twitter)

Newly-promoted Fulham are confident of wrapping up deals for Shakhtar Donetsk and Israel winger Manor Solomon, 22, for £7m and Sporting Lisbon and Portugal midfielder Joao Palhinha, 26, for £20m. (Mail)

Juventus are prepared to pay Wales midfielder Aaron Ramsey €4m (£3.45m) to get him off their books, allowing the 31-year-old to become a free agent. (IBianconero.com - in Italian) 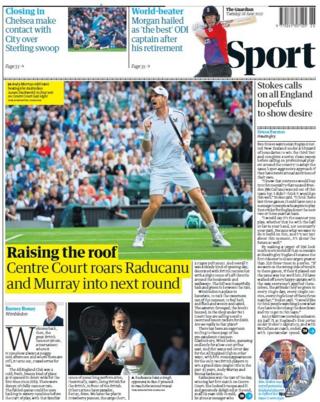 The back page of the Guardian