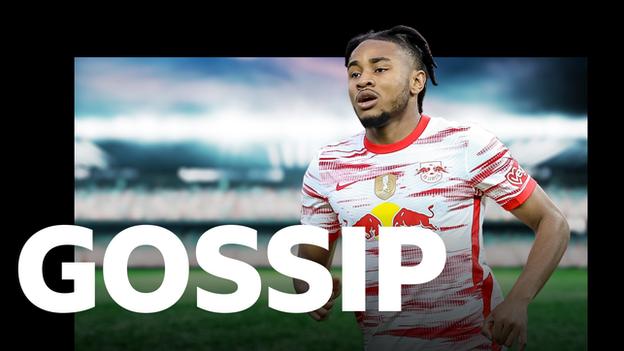 The Blues could make a late attempt to snatch Monaco's France international midfielder Aurelien Tchouameni, 22, ahead of Real Madrid once their takeover is completed. (Goal)

English goalkeeper Fraser Forster, 34, has undergone a medical at Hotspur Way ahead of completing his move to Spurs when his Southampton contract expires next month. (Mail)

Arsenal are keeping an eye on Alvaro Morata's situation. The Spain striker, 29, has spent the season on loan at Juventus from Atletico Madrid. (Tuttosport - in Italian)

Gunners target Tammy Abraham says he is 'more than happy' at Roma but the 24-year-old England striker has refused to rule out a return to the Premier League this summer. (Metro)

Arsenal are also interested in re-signing Germany winger Serge Gnabry from Bayern Munich but are unable to afford the 26-year-old this summer. (Christian Falk)

Who is your player of the season?

Arsenal have offered 22-year-old English striker Eddie Nketiah a final contract offer - and there is a growing feeling he will sign to stay on beyond his current deal which runs out in the summer. (Mail)

Real Madrid are believed to be ready to offer up to 120m euros (£102m) for 22-year-old AC Milan and Portugal forward Rafael Leao, whose contract runs out in June 2024 and includes a 150m euro (£128m) release clause. (Gazzetta dello Sport, via Football Italia)

Barcelona have yet to reach an agreement about extending France forward Ousmane Dembele's contract, with the 25-year-old's deal running out this summer. (Marca)

Aston Villa are ready to step up their pursuit of 22-year-old Rangers and Nigeria defender Calvin Bassey. (Times)

Barcelona have met with the agent of Villa's England Under-19 international midfielder Carney Chukwuemeka, 18. (Sport - in Spanish)

Paris St-Germain would be willing to sell Brazil forward Neymar, 30, if they receive an acceptable offer this summer. (Goal)

Liverpool have put England midfielder Alex Oxlade-Chamberlain, 28, up for sale with Aston Villa and West Ham among those interested. (Mirror)

Talks between West Ham and Czech midfielder Tomas Soucek, 27, over a new contract have reached an impasse. (Guardian)

Everton's 25-year-old English defender Jonjoe Kenny, who is out of contract in the summer, has dropped a hint on his future and said 'a lot is possible' this summer. (Liverpool Echo)

German midfielder Pascal Gross, 30, is in advanced talks over a new contract at Brighton with his current deal set to run out in June. (Kicker - in German) 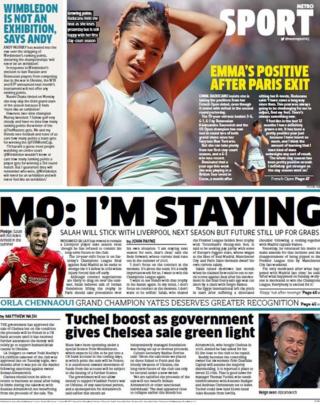