Paris St-Germain are increasingly hopeful that France striker Kylian Mbappe, who has been linked with Real Madrid, will sign a new deal with them following talks with the 23-year-old's mother last week. (Telegraph - subscription required)

Liverpool have made contact with France and Monaco midfielder Aurelien Tchouameni, 22. (Foot Mercato - in French)

Dutch midfielder Donny van de Beek, 25, will be given a chance at Manchester United next season by Ten Hag. (Telegraph - subscription required)

Abraham has reiterated his desire to stay at Roma after moving from Chelsea last summer. (Calciomercato - in Italian)

France defender Jules Kounde wants to leave Sevilla in the summer and the 23-year-old keen on a move to Chelsea. (Times - subscription required)

Chelsea are keeping tabs on German defender Amos Pieper, 24, whose contract at Bundesliga side Arminia Bielefeld runs out at the end of the season. (Mirror)

Newcastle are eyeing a move for Tottenham and Denmark midfielder Pierre-Emile Hojbjerg, 26. (Express)

The Magpies are interested in French defender Evan Ndicka, 22, who plays for Eintracht Frankfurt. (Bild - in German, subscription required)

There is optimism at Barcelona that Poland striker Robert Lewandowski, 33, could join from Bayern Munich this summer. (Sport - in Spanish)

Leeds United will target a move for Wales forward Brennan Johnson if they stay in the Premier League and Nottingham Forest, where the 20-year-old plays, fail to earn promotion from the Championship. (Mail)

Newcastle United are on the verge of giving Switzerland defender Fabian Schar a contract extension, with the 30-year-old's current deal running out in the summer. (Mail)

English full-back Ashley Young is keen to extend his contract with Aston Villa by another year, with the 36-year-old having joined the Midlands club from Inter Milan last summer. (Times - subscription required) 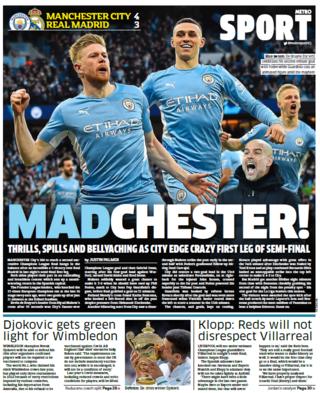