Paris St-Germain are set to sack manager Mauricio Pochettino with Tottenham boss Antonio Conte in the frame to replace him. (Le Parisien via GFFN)

Chelsea may revisit a move for Sevilla and France centre-back Jules Kounde, 23, in the summer after it was confirmed Antonio Rudiger will leave the club. (Football London)

German defender Antonio Rudiger is expected to join Real Madrid. The 29-year-old has told Chelsea he will leave this summer after turning down a new contract. (Mail)

Everton stand on the precipice after Merseyside derby defeat by Liverpool

Manchester City striker Gabriel Jesus, 25, has refused to commit his future beyond the end of the season. (Guardian)

Arsenal believe they can complete a summer deal for the Brazil international. (Mail)

Newcastle-linked Brazil international midfielder Lucas Paqueta, 24, has told his current club Lyon he will make a decision on his future at the end of the season. (Evening Chronicle)

Former Manchester United midfielder Roy Keane has emerged as a surprise candidate for the vacant manager's position at Hibernian. (Times)

Roma have joined the race for Juventus and Argentina forward Paulo Dybala, 28. (Fichajes - in Spanish)

Egypt midfielder Mohamed Elneny, 29, says he would sign a new contract at Arsenal even if he is not given assurances over his playing time. (Irish Examiner) 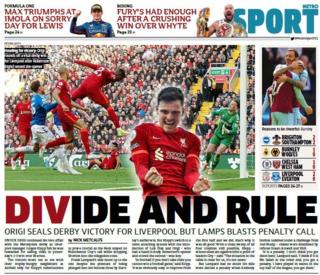