Barcelona and Juventus have made official approaches to sign 32-year-old Gabon striker Pierre-Emerick Aubameyang on loan from Arsenal for the rest of the season. (Athletic - subscription required)

West Ham boss David Moyes is keen on a move for Leeds United forward Raphinha and is trying to bring in the 25-year-old Brazil international before the January transfer window closes. (Mirror)

England winger Raheem Sterling is set to resume contract talks with Manchester City. The 27-year-old's current deal runs out in the summer of 2023 and Barcelona, Paris St-Germain and Real Madrid remain interested in the player. (ESPN)

Newcastle United are expected to increase their bid for Brighton's 29-year-old English defender Dan Burn and are also interested in signing compatriot Eddie Nketiah, 22, from Arsenal. Striker Nketiah's deal runs out in the summer. (Guardian)

Manchester United midfielder Paul Pogba is open to staying at the club if interim manager Ralf Rangnick remains at Old Trafford. The 28-year-old Frenchman was set to leave the club in the summer after his contract expires but is said to be open to negotiations. (Sun)

Derbies, protests & potential upsets - what to look out for this weekend

Brentford hope to be able to announce the signing of Denmark playmaker Christian Eriksen over the weekend. The 29-year-old had a pacemaker fitted following his cardiac arrest during Euro 2020 in June. (Times - subscription required)

Manchester United midfielder Donny van de Beek has begged the club to let him leave Old Trafford this transfer window. The 24-year-old Dutch international has started just four games this season with Crystal Palace leading the race to sign him on loan. (Mirror)

West Ham are in talks with Reims over a deal for 19-year-old French striker Hugo Ekitike, who has also been linked with Brentford, Brighton and Newcastle United. (Sky Sports)

The Hammers are also remain in discussions with Marseille as they try to sign Croatia defender Duje Caleta-Car, 25, and Senegal forward Bamba Dieng, 21, on loan from the French club. (90 Min)

Aston Villa have had a £20.8m bid for 24-year-old Uruguay midfielder Rodrigo Bentancur turned down by Juventus. (Guardian)

Tottenham also want to sign Bentancur but they want to bring him in on loan, which Juventus are not keen on. (Sky Sports)

Atletico Madrid have contacted the representatives of Aston Villa and Poland right-back Matty Cash and, while a bid this month is not out of the question, it is likely the Spanish club will try to sign the 24-year-old in the summer. (Sky Sports)

Juventus are looking at making a summer move for 30-year-old Italy midfielder Jorginho, whose contract at Chelsea runs out in 2023. (Gazzetta dello Sport, via Mirror)

Monaco want between 80m and 100m euros for 22-year-old France midfielder Aurelien Tchouameni, who is wanted by Real Madrid and has also been linked with Chelsea and Manchester United. (Marca)

Wolves are only considering offers of at least £40m for Portuguese midfielder Ruben Neves. Both Manchester United and Arsenal have expressed interest in the 24-year-old. (Sun) 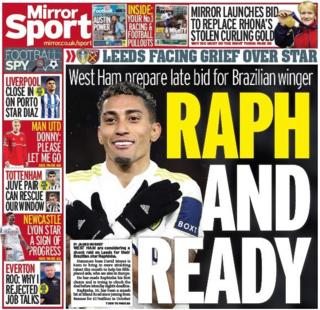