Arsenal face competition from Juventus in their pursuit of Fiorentina striker Dusan Vlahovic, 21, after Juve made their Serie A rivals an offer for the Serbia international. (Times - subscription required)

Vlahovic has been accused of ignoring the club's calls by Fiorentina chief executive Joe Barone following the Gunners' reported bid for the Serie A forward. (Metro)

Liverpool are monitoring Eduardo Camavinga's situation at Real Madrid having been admirers of the 19-year-old French midfielder for some time. (El Nacional - in Spanish)

England midfielder Jesse Lingard, 29, is looking for a loan move away from Manchester United in the January transfer window but is also open to running down his contract at Old Trafford. (Manchester Evening News)

Tottenham are open to selling England player Dele Alli and Argentina international Giovani lo Celso, both 25, after the midfield pair were left out of Antonio Conte's squad for the game against Chelsea on Sunday. (Goal)

Newcastle may consider Alli as a back-up option if they are unable to sign Jesse Lingard from Manchester United. (Mirror)

Spurs have made a move for non-league Lewes' English winger Ollie Tanner in an effort to beat Premier league rivals Brighton to the 19-year-old's signature. (Athletic - subscription required)

Brentford are close to finalising terms on a six-month contract with Denmark midfielder Christian Eriksen, with the Bees in the process of doing due diligence on the 29-year-old's fitness to play. (Sky Sports)

Newcastle are closing in on the signing of 25-year-old Netherlands left-back Mitchel Bakker from Bayer Leverkusen. (Mirror)

Arsenal have agreed terms on a loan deal until the end of the season for Juventus' Brazil midfielder Arthur Melo, 25. (90min)

The Reds face competition for his signature from Leeds and West Ham, with Carvalho out of contract at Craven Cottage in the summer. (Mail)

Newcastle's hopes of signing Atalanta striker Duvan Zapata have been boosted by the Serie A side's willingness to loan out the 30-year-old Colombia international for around £8m. (Mirror via HITC)

The Premier League is set to its change rules around the postponement of matches due to Covid, with clubs required to prove at least four positive cases to get matches rearranged. (Mail) 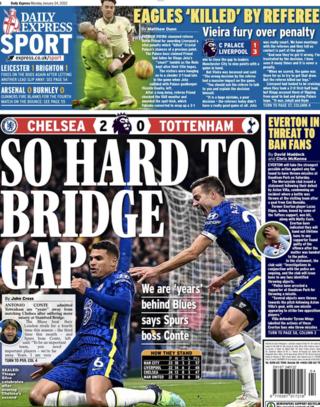