Arrests at football matches across the top five English leagues are at their highest levels in years, with fan disorder "getting worse", according to the UK's football policing lead.

The latest data covers the first half of this season - which has seen the return of fans to capacity stadiums after a year of lockdowns and restrictions.

There have been more than 800 football-related arrests in the first six months of the season, alongside more than 750 reported incidents of disorder.

It follows Baroness Casey's recent report into the Euro 2020 final violence, which found "ticketless, drunken and drugged-up thugs" could have caused death as they stormed Wembley.

Chief constable Mark Roberts, the head of the UK's Football Policing Unit, said cases of anti-social behaviour among younger fans is a particular area of concern.

Roberts has previously voiced his concern on newly-introduced safe standing 'rail seats' as well as a pilot scheme to allow fans to drink within sight of the pitch.

He said increased levels of disorder is expected after a major tournament - but the current level of activity is "concerning".

'Culture at games is biggest challenge'

Last month's Baroness Casey report into the mass disorder at the Euro 2020 final described "drunken and drugged up thugs" being responsible for "a day of national shame" at Wembley on 11 July, as England lost to Italy.

Within that report, Lady Casey called out the "culture" around disorder at football matches as "the biggest challenge" in tackling behaviour, recommending a Football Association campaign to force "a sea-change in attitudes towards supporter behaviours".

One fan at that game, 'Tom', told BBC Radio 5 live: "In our row there was a group of 10 mates, none of them had tickets, all of them were snorting cocaine. It felt very very dangerous."

Testimony given to Baroness Casey's report suggested copious amounts of drugs, particularly cocaine, were being taken. The report said that 47% of 7,000 ticket holders who took part in the review saw illegal drug taking when arriving at Wembley, with steward and security staff reporting a high level of drug use.

Lady Casey also said: "I think drugs is a significantly greater issue than probably people have realised" and called for a "national conversation about greater civility and responsibility" that goes beyond football. 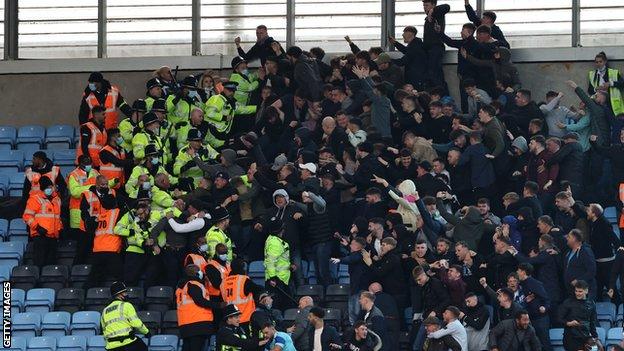 Amanda Jacks of the Football Supporters Association posted the story of one fan 'Steve' on social media recently as an example of some of the "football lad culture" being reported:

"Steve lives for football culture, a culture that belongs to a lot of young men. A culture that involves mates, fashion, image, alcohol, cocaine and sometimes trouble. He tells me that he doesn't go looking for bother, but equally he won't run from it either.

"He's already been convicted of a relatively minor offence and, despite admitting this should have been a wake-up call, it wasn't enough to make him give up, or moderate, his lifestyle.

"When I asked him what was so appealing about this way of life his answer was immediate - it made him feel like a man, it enabled him to exert a certain type of masculinity. He knew that some would describe that masculinity as toxic.

"Despite making good money, Steve isn't interested in saving for his future. That isn't necessarily uncommon but in Steve's case he doesn't see convention or stability in his future.

"What I can't stop thinking about is how somebody so self aware and insightful (at a relatively young age) can be so addicted - by his own admission - to a way of life that is unhealthy in so many ways.

"[Steve] is all too aware of the very real potential that his choices may not end at all well for him... how sad it is that somebody apparently so intelligent is currently prepared to chuck his future away so he can exert a certain type of masculinity he feels that being a man is all about."

What are the reasons? Reaction

University of Manchester professor in law Geoff Pearson, regarded as one of the UK's leading experts on football-related disorder, said the data would match "anecdotally, what we have been hearing from both football officers and fan representatives".

"It is quite usual for us to see fluctuations regionally, in terms of levels of football violence and disorder, but I think the new stats are interesting because they tend to indicate maybe a national trend," Pearson told BBC Sport.

"There are a number of different reasons, some relating to fan behaviour and others to overall match management.

"In terms of fans, it could be that we have a post-lockdown effect, which is that fans didn't have the opportunity for that transgressive carnivalesque behaviour during lockdown and now they are essentially letting their hair down and engaging in more of that behaviour that is challenging and bordering on criminality.

"Also in terms of management, we have had 18 months out of live football attendance and that has had an effect on the police because it means those opportunities to build relationships and engage in dialogue and identify problematic individuals simply haven't been there, and there is a lot of knowledge that has been lost and there will be key personnel who have moved on as well."

Chief constable Roberts said proposals to change alcohol consumption laws at football - currently banned when in sight of the pitch unlike rugby and other sports - were "madness" and "irresponsible", given the increases in disorder. However, Pearson believes those laws need a "re-think".

He added: "Alcohol has always been a problem in terms of football attendance and, unfortunately, the legislation introduced in the 1980s hasn't been effective at reducing alcohol consumption and has in fact created issues such as crushing at concourses, late entry at the turnstiles and those are many of the flashpoints where the incidents of disorder this season have been taking place."