France striker Anthony Martial, 26, wants to leave Manchester United but does not want to go out on loan to another English club. Barcelona, Sevilla and Juventus are three options for a January move. (Fabrizio Romano)

Newcastle United have offered a fee of over 30m euros (£25.1m) for Atalanta and Colombia striker Duvan Zapata, 30. (Daily Record)

Wolves winger Adama Traore, 25, could get the green light to leave the club in the next 24 hours, with the Spain international linked with moves to Tottenham and former club Barcelona. (Star)

David Beckham can move for a big signing at Inter Miami after the departure of high-earning French midfielder Blaise Matuidi, with Atletico Madrid and Uruguay striker Luis Suarez, 34, among the names being tipped to arrive. (Sun)

Rangers left-back Borna Barisic, 29, has confirmed a club made a move for him earlier in the transfer window, amid rumours linking the Croatia international with Watford and Aston Villa. (Sky Sports)

Arsenal's negotiations with Juventus over a loan deal for midfielder Arthur Melo have stalled because the Serie A club have not yet found a replacement for the 25-year-old Brazilian. (Tuttomercatoweb, via Express)

Bayern striker picks up another one

Free agent Diego Costa, who had been linked with Arsenal, is keen on a move to Brazilian club Corinthians, where the 33-year-old Spain international would link up with former Chelsea team-mate Willian. (Evening Standard)

Manchester United are also leading Juventus and Inter Milan in the race to sign 26-year-old Serbia midfielder Sergej Milinkovic-Savic from Lazio, but the Serie A club will demand at least 80m euros (£66.8m). (Il Messaggero via Sport Witness)

Belgium forward Eden Hazard wants to leave Real Madrid, but is not interested in joining Newcastle, who have had a £41.3m bid for the 31-year-old accepted by the Spanish club. (El Nacional - in Catalan)

Barcelona have given 24-year-old France winger Ousmane Dembele 48 hours to make a decision on the club's reduced contract offer, with his current deal set to expire at the end of the season. (Mundo Deportivo - in Spanish)

Paris St-Germain have offered Chelsea the chance to sign France defender Layvin Kurzawa, but Blues boss Thomas Tuchel is not keen on the 29-year-old despite losing England left-back Ben Chilwell, 25, to a serious knee injury. (Goal)

France goalkeeper Hugo Lloris, 35, is close to extending his contract with Tottenham. (football.london)

Manchester City's 23-year-old goalkeeper Arijanet Muric, who is on loan at Turkish club Adana Demirspor, is set to join Galatasaray at the end of the season. (Koha Net, via City Xtra) 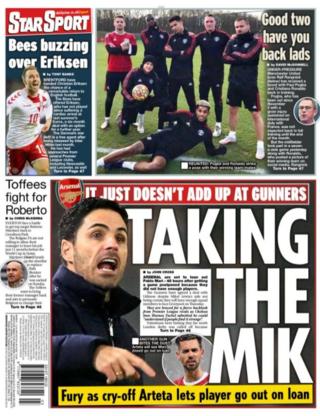