France striker Kylian Mbappe says he will not be moving to Real Madrid in January and will be staying at Paris St-Germain until at least the end of the season. The 23-year-old's contract with the Ligue 1 side runs out in the summer. (CNN)

Leeds United winger Raphinha has been linked with Liverpool and Bayern Munich, but the 25-year-old Brazil international will not push for a move in January. (Mirror)

Barcelona have not given up on trying to sign Spain defender Cesar Azpilicueta, 32, and Denmark defender Andreas Christensen, 25, from Chelsea. (Sport - in Spanish)

Chelsea are considering trying to sign Everton's 28-year-old France left-back Lucas Digne, with the Blues likely to be without England defender Ben Chilwell, 25, for a lengthy spell because of a knee injury. (90 Min)

Czech Republic striker Patrik Schick, 25, is a target for a number of Premier League clubs - he has been watched by Arsenal, Everton, Manchester City, Tottenham and West Ham in recent months - but Bayer Leverkusen are in no hurry to sell a player who is under contract until 2025. (90 Min)

Manchester City will not sign a replacement for Spain forward Ferran Torres, 21, following his move to Barcelona in January in order to give more game time to young players such as 19-year-old English forward Cole Palmer. (Times)

Newcastle are lining up a move for France centre-back Samuel Umtiti, with Barcelona keen to offload the 28-year-old. (Marca)

Newcastle are also interested in bringing in Brazil striker Gabriel Barbosa in January, but the 25-year-old would prefer to stay with Flamengo. (Mirror)

Italy forward Lorenzo Insigne, whose contract at Napoli runs out in the summer, is tempted by an offer from Toronto FC, and the Major League Soccer side are pushing to sign the 30-year-old in January. (Sky Sport Italia, via Football Italia)

Insigne could be prepared to choose Toronto over a move to Tottenham and Inter Milan. (Mirror)

Juventus want to change the terms of the contract extension agreed with 28-year-old Argentina forward Paulo Dybala, who will be free to leave when his deal runs out in the summer. (La Gazzetta dello Sport, via Football Italia)

QPR are ahead of Nottingham Forest in trying to sign 30-year-old English defender Steve Cook from Bournemouth. (Mail)

Middlesbrough are closing in on a move to sign Republic of Ireland forward Aaron Connolly, 21, on loan from Brighton. (Mail) 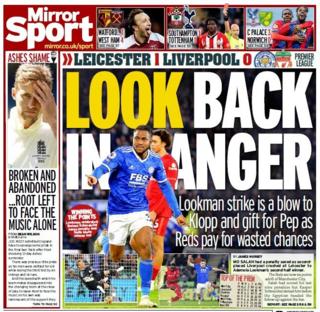