Chelsea captain Cesar Azpilicueta, 32, wants to stay at the club despite Barcelona showing interest in signing the Spain defender when his contract expires in the summer. (The Athletic - subscription required)

Tottenham Hotspur and Roma are vying for the signature of Hoffenheim and Germany midfielder Florian Grillitsch, 26. (Sky Germany)

'You have to live in poverty to know what poverty is'

The Brazil & Barcelona great who never dared to dream

Chelsea had a £72m bid for Paris St-Germain defender Marquinhos, 27, rejected in the summer. (L'Equipe - in French)

Brazil centre-back Marquinhos will sign a new contract at PSG until 2026 or 2027. (Fabrizio Romano)

The Magpies are the front runners among clubs wanting to sign Wales centre-back Joe Rodon on loan from Tottenham in January, with Leeds United and Watford also monitoring in the 24-year-old. (Telegraph - subscription required)

Aston Villa have received four offers for 25-year-old Brazil striker Wesley, who is on loan at Club Brugge. (HLN - in Dutch) 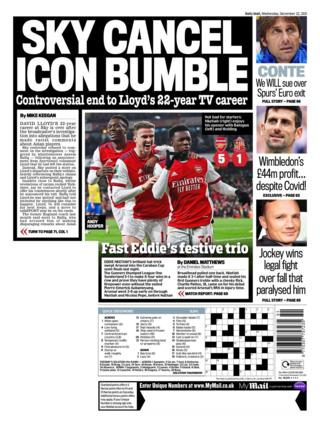