Real Madrid are favourites to sign Germany defender Antonio Rudiger, 28, who is getting closer to leaving Chelsea as a free agent at the end of the season. Premier League rivals Manchester United and Tottenham have also expressed an interest. (Independent)

Liverpool are interested in 28-year-old Juventus and Argentina forward Paulo Dybala, whose contract expires at the end of the season. (Calciomercato - in Italian)

Who needs what in Europe?

Who has qualified and who needs what in the final round of Champions League and Europa League group games?

Barcelona hope a compromise can be reached with Manchester City to allow them to sign Spain forward Ferran Torres for £38m. City want £51m for the 21-year-old. (Mundo Deportivo - in Spanish)

Lille's 24-year-old Portugal midfielder Renato Sanches is open to a move to Arsenal, but the Gunners may face competition from AC Milan. (L'Equipe, via Mail Online)

Ivory Coast winger Nicolas Pepe, 26, is frustrated with his lack of playing time at Arsenal and will assess his options in January. (Football.London)

West Ham face being without 27-year-old France defender Kurt Zouma for 12 weeks because of a hamstring injury. (Times - subscription required)

Leeds United midfielder Kalvin Phillips, 26, also has a hamstring injury and the England international could be out for two months. (Telegraph - subscription required)

Italy boss and former Manchester City manager Roberto Mancini, who has been linked with taking over at Manchester United, has denied reports of a move back to the Premier League. (Gazzetta dello Sport, via Mirror)

Former Manchester United keeper Edwin van der Sar, who is currently Ajax chief executive, believes "that one day the moment will arrive" for him to take up a role Old Trafford. (RTL, via Metro) 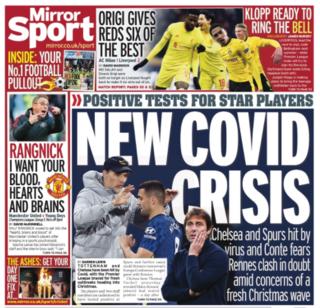