Chelsea's Spanish defender Cesar Azpilicueta, 32, is in advanced talks with Barcelona over a move this summer. (El Nacional, via Daily Mail)

Manchester United have joined Premier League strugglers Newcastle United in the race to sign Barcelona winger Ousmane Dembele, with the 24-year-old France international having made a decision over his future. (Mundo Deportivo, via Express)

Newcastle are also prepared to double the salaries of Burnley's English defenders Ben Mee, 32, and 29-year-old James Tarkowski to tempt them to quit the Clarets. (Mirror)

Can you name every Premier League club's longest-serving player?

Chelsea's move for Fenerbahce's 23-year-old defender Attila Szalai is a "done deal", according to his Hungary boss Marco Rossi. (Mirror)

Norwegian winger and Arsenal transfer target Mohamed Elyounoussi, 27, has insisted he and his family are happy with life at Southampton. (Sun)

Leicester City scouts were in attendance for Juventus' 2-0 win over Genoa at the weekend to watch French midfielder Adrien Rabiot, 26, and 27-year-old Italian international Federico Bernardeschi. (CalcioMercato, via Leicester Mercury)

AC Milan's Swedish striker Zlatan Ibrahimovic, 40, has expressed his ambition to remain with the Serie A club for the rest of his playing career. (Star)

Portuguese defender Diogo Dalot, 22, has delivered a defiant message and insists he is ready to "give everything" at Manchester United in a blow to potential suitors. (Daily Mail)

Lionel Messi has begun to question whether Mauricio Pochettino is up to the task of being Paris St-Germain manager after the 34-year-old Argentina forward registered concerns over his tactics and ability to control the dressing room. (L'Equipe, via Mirror)

Arsenal look set to sanction a January loan exit for 20-year-old England youth international forward Folarin Balogun - despite facing the prospect of losing 32-year-old Gabon striker Pierre-Emerick Aubameyang for up to a month during the Africa Cup of Nations. (Express)

Championship side Bournemouth are one of a number of clubs linked with a possible January move for Balogun. (Bournemouth Echo) 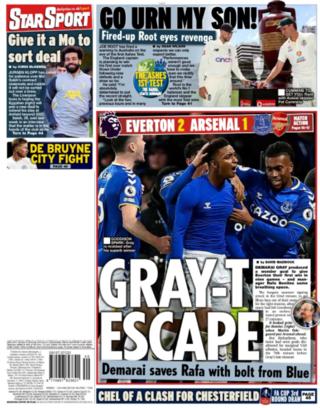 Back page of the Star