Manchester United are set to watch RB Leipzig midfielder Amadou Haidara with a view to a possible move for the 23-year-old Mali international in January. (Mail)

Wolves could lower their asking price to about £20m for their 25-year-old Spain winger Adama Traore, who has 18 months left on his contract - and that could alert Liverpool. (Football Insider)

Leeds are considering a move for Real Madrid forward Mariano Diaz, 28, who has one cap for the Dominican Republic. (Fichajes.net, in Spanish)

'Why this week is make or break'

Chelsea's Malang Sarr, 22, is being targeted by Inter Milan. The France Under-21 defender has only made three appearances since joining in 2020. (SportMediaset via Sun)

Nuno Espirito Santo wants a quick return to management following his sacking by Tottenham but a Premier League club is more likely than a reported move to Ligue 1. (Le10 Sport, in French) 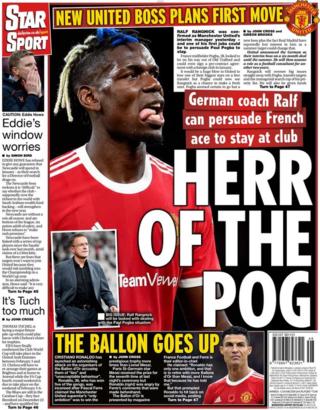